On October 8th I decided I was going to finally tackle the issue of a database for all the Nihon Ken that incorporates calculation of COI and AVK, plus tracks health issues. CJ Hammond over in the US helped immensely in setting up the GoFundMe so that I wouldn't have to foot the bill all on my own. I'm a bit late in announcing that we reached our funding goal very quickly (I think it took around a week), so we deactivated the campaign. 2100USD was raised, and after fees I think I received just over 2000USD. 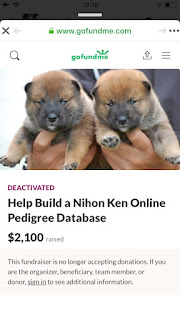 This is a fairly busy time of year for me, so things haven't moved as crisply as I would like, but we now have a database online that covers the Shikoku, Kai, and Kishu. Of course there are no entries for the Kai, and only a few for the Kishu at the moment, but I'll be working on that. Check out the site! You can toggle between breeds using the bar on the top left of the site (the default is 'ALL BREEDS')
https://nihonken.pedigreedatabaseonline.com 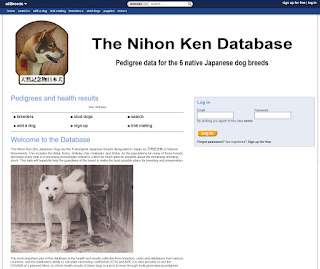 Next year I will be adding functionality for the other three Nihon Ken, the Akita, Shiba, and Hokkaido. Thank you all for your support, I couldn't have done this without you. You all are amazing. Also, a big shout out to the guys behind the scenes at Pedigree Database Online for all their help with the backend of the website. There are still some kinks to iron out, which I will get to as I start to add more data.

One thing that has changed from my original site is that dog names and kennel names are now entered in the same field in a continuous line eg. Masamine Go 雅峰号 Futomi Sou 太海荘
So English name, Japanese name, English kennel name, Japanese kennel name.