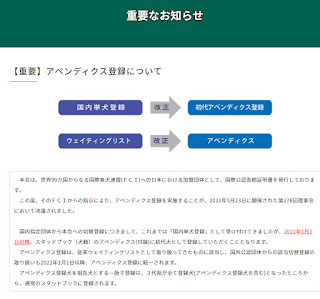 So the JKC has now formally announced that from January 1st, 2022, they will no longer allow 'single dog registration' (単犬登録）from a list of Japanese registries that include NIPPO, AKIHO, and DOKENHO. From January 1st, 2022, they will only accept transfers from these registries to the JKC APPENDIX registry. The cost of transferring registration will remain the same. Here is a link to the announcement on the JKC's website

Dogs with appendix registration can have an appendix export pedigree issued (like someone mentioned the Korean Kennel Federation does), which will definitely be helpful. Since I haven't seen what the appendix export pedigree looks like, I can't say exactly what information will be included on it, but I was told by the JKC registration department that it will be look similar to the current JKC export pedigree, but in the top corner will have an APPENDIX annotation. It will be a three generation pedigree, with the APPENDIX registered dog receiving an APPENDIX registration number along with other information like coat color etc listed. However, all dogs on the pedigree that are not APPENDIX registered will only have their name listed.

As I mentioned in my last post, appendix registered dogs can generally be shown, but will not receive cards/points toward championships, and if used for breeding, their progeny can only be appendix registered until 3 generations have been registered in the appendix. Overseas kennel clubs seem to vary in the way they accept pedigrees from other clubs, so now would probably be the time for overseas Nihon Ken clubs to prepare for the switch next year.

This will most likely affect the Akita less than the other breeds, since most of the well known kennels in Japan are now hurriedly becoming JKC members, creating JKC clubs, and registering their dogs with the JKC. For the Hokkaido Ken, overseas breeders will generally just have to plan to make do with appendix pedigrees (for future imported dogs) since very few, if any, DOKENHO members will make the move over to JKC pedigrees. The same can generally be said for the Shikoku and Kishu. You will still have NIPPO pedigrees and an appendix pedigree to work with, just no more full registration JKC Export Pedigree. Since some dogs in Japan will have full registration JKC pedigrees, every now and again dogs will pop up with NIPPO and full registration JKC, but that will probably be the exception.