The Akita Inu is the largest of the six, native, Japanese spitz type dogs, and the only breed in the ‘large’ category. The breed originated in the northernmost part of the island of Honshu from the hunting dogs of the Matagi (subsistence hunters). The dogs of the Matagi were similar in size to the other medium sized Japanese breeds, and were used to hunt big game such as deer and bear. 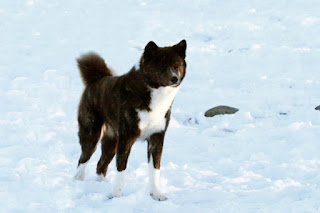 During the Edo period the local ruling Satake family promoted dog fighting as a way to entertain and increase moral among their soldiers. The matagi dogs were bred toward larger stronger dogs to increase their fighting prowess. With the arrival of the Meiji period, the Tosa from Shikoku, the Karafuto and Hokkaido from Hokkaido, along with many large Western breeds were bred to the local fighting dogs. Mastiffs, German Shepherds, and Great Danes are some of the Western breeds bred from. The breed lost many of it’s Spitz characteristics such as prick ears, double coats, and curled tails and became known locally as the ‘Shin Akita’ or New Akita.

After dog fighting was outlawed at the end of the Meiji period the breed went into decline, but as the Taisho period began there were calls from breed fanciers and academics to preserve the breed. In 1918 the Natural Monument Preservation Law went into effect, and in 1931 the breed was declared a Living Natural Monument. During the harsh economic period Japan experienced during and immediately after World War 2, owning dogs was seen as wasteful and unpatriotic. Most dogs other than German Shepherds (which were considered useful as military dogs) were rounded up and killed, and the large Akita was no exception. The dog’s coats were used to provide clothing for the military, and many were eaten. It was through the noble efforts of a few that the breed did not go extinct. However, the breed’s number were severely depleted, and many prime specimens of the breed were lost. It took many years and the efforts of many to bring the breed back from the brink of extinction.

During the war, some Akita were bred with German Shepherds in an effort to save them from slaughter. This and the breed’s mixed heritage from it’s fighting days gave the Akita of the time a distinctly different look from the other Japanese breeds. After the war, US servicemen stationed in Japan became interested in the breed, and many took dogs back with them. These Akita became the foundation of the breed in the US and overseas. In Japan however a movement to return the Akita to its ‘original’ state began around this time. An extensive breeding program to select for preferred type began, leading to the creation of the modern Japanese Akita. In the United States however, the larger, heavier boned Akita were preferred leading to two very different strains of this once single breed. Today in Japan the types have been split into two separate breeds, however overseas some kennel clubs still recognize them as one breed.

The Akita and Shiba are the most famous of the Japanese breeds, and much of the Akita’s fame can be attributed to the story of an Akita named Hachiko who for years waited daily at Shibuya station for his dead master’s return. While the breed is well known in Japan, its numbers have declined due to its large size and the housing situation in the country. The FCI Akita standard describes the breed as: “A large-sized dog, sturdily built, well balanced and with much substance; secondary sex characteristics strongly marked, with high nobility and dignity in modesty; constitution tough.” The breed comes in three colors, aka (red), shiro (white), and tora (brindle). Like all the Nihon Ken, the Akita has a double coat made up of protective coarse outer guard hairs, and a fine thick undercoat that is shed seasonally. All colors except white must have urajiro (light cream or white markings or shading) on the sides of the muzzle, on the cheeks, the underside of the jaw, neck, chest, body and tail, and on the inside of the legs. Dogs range in size from 64-70 cm at the withers, and bitches from 58-64 cm (NIPPO, JKC, FCI, with the AKIHO standard being smaller by .3cm due to following old Japanese measurements).

Akita are intelligent, independent dogs, and they can make excellent companions for the individual prepared to give them the attention and exercize they require. They can be territorial, and make reasonable watch dogs, but are not by nature guard dogs or protection dogs.

They are a rare breed even in their native country with yearly registrations of between 2,000 and 2,500 (all registries). The main breed registry is run by the Akita Inu Hozonkai.

At present there is little data regarding genetic health issues within the breed. However, some conditions that are known to affect the Akita are allergies, sebacious adenitis, vkh syndrome, hip dysplasia, infertility, and hypodontia.