The Hokkaido Ken is one of the six, native, Japanese spitz type dogs. A medium sized breed that originated on the northernmost island of Japan, Hokkaido, they are often referred to as Ainu Ken after the original indigenous people of Japan. The Ainu called their dogs ‘seta’ or ‘shita’ and used them to hunt bear and deer. The Hokkaido Ken is thought to have crossed over to Hokkaido with the Ainu as they were pushed north by the arrival of the Yayoi from the Korean peninsula. 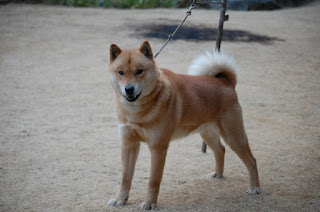 The Hokkaido are thought to carry more of the genes from the older type of dogs that arrived in Japan with the Jomon. Although they did interbreed with the dogs brought over by the Yayoi, due to their exodus across the sea to Hokkaido they were geographically isolated. Studies have shown they share DNA with the Ryukyu Ken of Okinawa which are also believed to carry more genes from the original Jomon dogs.

The Ainu passed on stories by word of mouth, and several legends featured dogs. In the legend of the birth of the Ainu people, a princess was washed ashore on a desolate beach. As she was crying over her plight a white dog appeared and brought her food. From that day on the dog lived with her, and one day a child was born between them. The child grew to be strong and powerful, and the forefather of the Ainu. 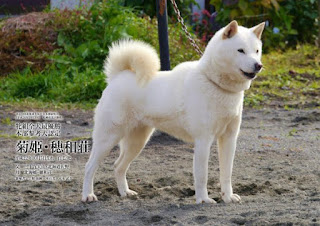 The breed was originally made up of several bloodlines named after Ainu villages where they originated, with the most famous lines being the Chitose, Biratori, Atsuma (Azuma), and Yuwamizawa. Today the Chitose line is the only true line remaining, with the rest of the breed being a mix of all original lines. White, smaller sized dogs with small ears and wide foreheads were common in the Chitose line. In comparison the Atsuma line had a large number of brindle dogs, with more tapered muzzles.

The Hokkaido is renowned for it’s bravery. While very few are still used to hunt bear today, at breed shows hunting tests are conducted where the dogs are shown a live bear and scored on their movement, reaction, and hunting drive. 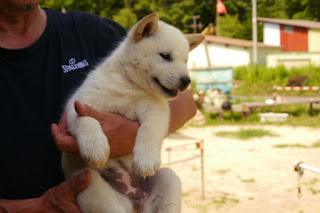 The Hokkaido Ken is a medium sized, strongly built dog. They have longer thicker coats than the other Japanese breeds, and also have wider chests, and smaller ears. Like all the Nihon Ken, they have a double coat made up of protective coarse outer guard hairs, and a fine thick undercoat that is shed seasonally. The breed comes in several colors: white, red, black, brindle, sesame, and wolf grey (HKH). Many Hokkaido also have spotting on their tongues. The breed has prick ears, and curl or sickle type tails. Dogs are between 48.5-51.5cm, and bitches 45.5-48.5cm (JKC,FCI,HKH), dogs 49-55cm, bitches 46-52cm (NIPPO).

The Hokkaido is a brave, energetic breed, capable of withstanding the cold temperatures of the Hokkaido winter. They have a life expectancy of around 15 years. The breed is extremely rare outside its native country. In Japan there is an estimated population of around 10,000, and yearly registrations of around 300 pups nationally (all registries).

At present there is little data regarding genetic health issues within the breed. However, some conditions that are known to affect the Hokkaido are heart murmurs, CEA, PRA, allergies, hypodontia, epiphora due to malformed or blocked tear ducts, and a high instance of cryptorchidism