The Kai Ken, also known as the Tora Inu (Tiger Dog), is one of the six, native, Japanese spitz type dogs. The breed’s brindle coat distinguishes it from the other medium sized Nihon Ken. In size, the Kai is larger than the Shiba, but marginally smaller than the Shikoku, Kishu and Hokkaido, giving it a unique place among the Japanese breeds. 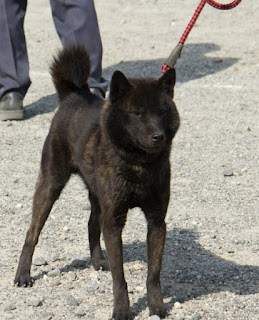 The Kai originated in the mountainous region of Kai (modern day Yamanashi) which gave the breed its name. Historical records tell of the famed brindle hunting dogs of the region, and their hunting prowess was believed to be second to none. While traditionally used to hunt Kamoshika, a type of mountain antelope similar to a chamois, their versatility and athleticism allowed them to be used to hunt many types of game, ranging from pheasant to bear. Today they are primarily used to hunt pheasant, wild boar, and deer.

It is believed the first domesticated dogs arrived in Japan with the Jomon and Yayoi peoples. Over thousands of years the dogs remained essentially the same due to the country’s geography and isolationist policies. However as Japan opened up to the outside world, the native dogs crossbred with Western dogs leaving fewer and fewer of the original Nihon Ken (Japanese Dog). As the Showa period began efforts were made to classify and preserve the remaining Nihon Ken. Research teams scoured the country searching for and cataloguing the remaining pockets of native dogs. Thanks to the Yamanashi region’s mountainous terrain and limited accessibility there were considerable numbers of quality specimens to be found.

In 1931 Dasuke Adachi, a prosecutor in Kofu city, saw one of these brindle coated dogs and it made a strong impression on him. After some research he discovered that these dogs could be found in Ashiyasu village. He began efforts with other prominent citizens to locate and preserve this rare type of Nihon Ken. After much difficulty he was able to locate and return to Kofu city with 2 of the best available specimens. Hence began the preservation of the Kai as a breed. In November of the same year the Kai Ken Aigokai was formed with Mr. Adachi as its chairman. At the first Nihon Ken Hozonkai (Japanese Dog Preservation Society or NIPPO) show, the Kai drew much attention from the attendees, which helped lead to the classfication of the Kai as a Living Natural Monument by the government of Japan in 1933. Kai numbers increased under national and prefectural government protection, with the prefectural government awarding tax incentives to owners of these national treasures. Thanks to this the Kai emerged relatively unscathed from the period during and following World War 2. While the other Japanese breeds faced harsh conditions, and extremely depleted numbers, the Kai was left primarily intact, with many of the dogs being kept at local government offices and police departments. The fact that post war over half of the registered dogs in Yamanashi prefecture were Kai, shows just how effective these measures were.

The FCI Kai standard describes the breed as: “A medium-sized dog, well balanced, sturdily built, muscles well developed. The dog has the characteristics of a dog living in mountainous districts of Japan. Limbs strong and hocks remarkably developed.” The are three recognized breed colors, all brindle: aka-tora (red), chu-tora (medium), and kuro-tora (black), with aka-tora being the rarest of the three variations. There is a recessive gene in the breed which occasionally produces non-standard white (or cream) colored Kai. Most Kai have dark spots on their tongues. Like all the Nihon Ken, the Kai has a double coat made up of protective coarse outer guard hairs, and a fine thick undercoat that is shed seasonally.

The JKC, Nippo, and KKA offer differing standards for the breed, with the Kai Ken Aigokai having the largest variation in size and type. The KKA standard recognizes Kai between 40-50cm, JKC 47-53cm for dogs, 42-48 for bitches, NIPPO 47-55cm for dogs, 44-52cm for bitches (a special allowance of 2cm under the NIPPO ‘medium’ standard has been made for the breed), FCI has dogs at 50-56cm, bitches at 45-51cm. 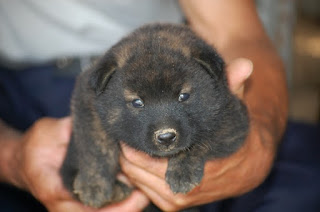 The Kai as a breed is intelligent, athletic, and alert, with a strong desire to hunt. Like most Nihon Ken the Kai is an independent thinker. Many are very attached to their owners, and they can make excellent companions for the individual prepared to give them the attention and exercise they require. They can be territorial, and make reasonable watch dogs, but are not by nature guard dogs or protection dogs. They have shown the ability to be quick learners, with some active in Japan as search and rescue dogs. They are a rare breed even in their native country with an estimated population of around 12,000-14,000, and yearly registrations of between 900 and 1,100, (all registries combined). The main breed registry is run by the Kai Ken Aigokai.

There is still limited data available regarding genetic health issues within the breed. Some conditions which have been seen in the breed are allergies, seizures, luxating patella, hypodontia, PRA, and a high instance of cryptorchidism.