The Shiba Inu is the smallest and most popular of the six, native, Japanese breeds. It is the only Nihon Ken that was not named after a geographical area. The reason for this is that in contrast to the other Nihon Ken, the Shiba is from a very large geographical area in central Japan. Like all the Nihon Ken, the Shiba was a hunting dog first and foremost, used to hunt small game and birds. 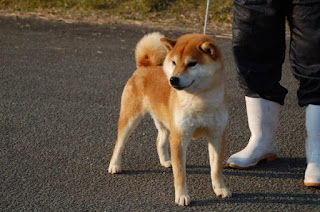 It is said that the Nihon Ken has been present in Japan since the Jomon period. Unearthed shell mounds from the period have uncovered canine bones with approximately the same bone structure and size as the modern day Shiba. The fact that many of these dogs are believed to have been buried with their masters shows the close relationship the people of the time had with these dogs. Today there is a type of Shiba called the Jomon Shiba, which has been back bred to resemble the bone structure and type present in the early native dogs.

The Nihon Ken Hozonkai (Japanese Dog Preservation Society, or Nippo) was established in 1928 to preserve the native dogs from extinction. Crossbreeding with western dogs was prevalent, and Nippo members scoured the country collecting dogs from remote areas for breeding programs. The Shiba was declared a Living Natural Monument by the government of Japan in 1936. 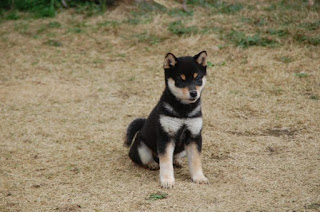 During the harsh economic period Japan experienced during and immediately after World War 2, owning dogs was seen as wasteful and unpatriotic. Most dogs were rounded up and killed, and the Shiba was no exception. The dog’s coats were used to provide clothing for the military, and many were eaten. It was through the noble efforts of Nippo members that the Shiba survived. The breed’s number were severely depleted, and many prime specimens of the breed were lost. It took many years and the efforts of many society members to bring the breed back from the brink of extinction. Today the Shiba is the most popular of the Nihon Ken, accounting for approximately 80 percent of dogs registered with Nippo every year. The breed has also become popular overseas.

The Shiba is the only small sized Nihon Ken. It has prick ears, and a curl or sickle tail. Like all Nihon Ken, the Shiba has a double coat made up of coarse outer guard hairs, and fine thick undercoat which it sheds twice a year. It has a somewhat shorter coat when compared with the other Japanese breeds. There are three recognized coat colors: red, black, and sesame. White (or cream) Shiba are also born on occasion, but are disqualified in the NIPPO show ring (registration is allowed). All Shiba should have “urajiro” markings which are markings of a white or cream color presented on the ventral portions of the body and legs, as well as on the cheeks and brow of the head. Dogs range in size from 38-41cm, and bitches from 35-38cm (NIPPO, JKC), dogs 38.5-41.5cm, bitches 35.5-38.5cm (FCI). 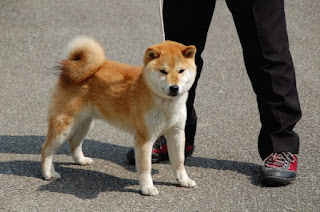 The Shiba is intelligent, and like all Nihon Ken, is a very independent thinker. They are an alert and energetic breed. Yearly registrations in their home country number from 50,000-60,000 (all registries combined). At present there is no estimate available for the total population. The main breed registry is run by Nippo, but there are several smaller breed clubs, and a large number of Shiba are registered with the JKC. There are also 2 rarer ‘types’ of Shiba, the Jomon Shiba, and the Mino Shiba. The Jomon was back bred to traits found in the earliest dog bones discovered in Japan, and has less of a stop, and a thinner longer muzzle. The Mino Shiba is a deep mahogany red color and is found in Gifu Prefecture.

At present there is little data regarding genetic health issues within the breed. However, some conditions that are known to affect the Shiba are luxating patella, hip dysplasia, allergies, hypodontia, epiphora due to malformed or blocked tear ducts, cryptorchidism, and gangliosidosis.