The Shikoku Ken is one of the six, native, Japanese sptiz-type dogs. Native to the mountainous region of Kochi prefecture on the island of Shikoku, these athletic and agile dogs are accomplished big game hunters and are sometimes referred to as the Kochi Ken. The Shikoku Ken is prized for it’s tenacity in face of large game and their relative calm around the family. Originally known as the Tosa Ken, they were renamed so as not to be confused with the Tosa fighting dog. 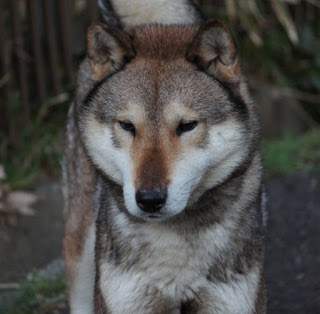 In post World War I Japan, the relative prosperity of the country succumbed to economic hardship as the Showa period began in 1926. Once relatively common, luxuries such as dog ownership became increasingly uncommon. In 1928, the Nihon Ken Hozonkai (NIPPO) was formed. NIPPO is an organization dedicated to the preservation of the six native Japanese spitz-type dogs. In 1937 NIPPO succeeded in having the Japanese government declare the Shikoku Ken a Living Natural Monument.

The breed was made up of three distinct lines: the Awa, the Hongawa and the Hata, all named after the areas they originated from within Kochi prefecture. The distinction between these lines has blurred over the years as lines were cross bred. The modern Shikoku is thought to descend mainly from the Hongawa and Hata lines as the Awa line essentially disappeared as a result of the hardships caused by World War II and a lack of quality specimens due to cross breeding with outside dogs. 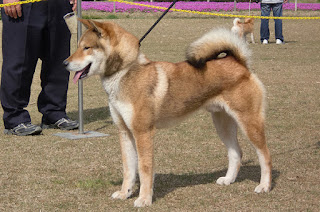 One of the foundation dogs of the Hata line was “Goma-gou,” who was born in 1934. He obtained a Best in Show title in 1940. The principle elements of the Hata line included a generally heavier, stockier build and thicker, longer, and more profuse coats; skulls tended to be broader, ears tidier and smaller, and movement ponderous. Much of the Hongawa line is attributable to the foundation dog “Choushun-gou” who took Best in Show the following year and was also born in 1934. These dogs were characterized by light, flowing movement, long, strong limbs with excellent angulation, good ear set and correct eye colour. Their outer coats were harsh and weatherproof, but their protective undercoats did not match the quality of the Hata line’s. Hongawa Shikoku also tended to be slender and have a more elegant build. Ultimately it was the Hongawa Shikoku that was to have the most influence on the direction of the breed as we know it today. Two other notable Shikoku from the same period are “Kusu-gou” who took Best in Show in 1939, and “Kuma-gou”. These four dogs formed much of the foundation for the modern day Shikoku. 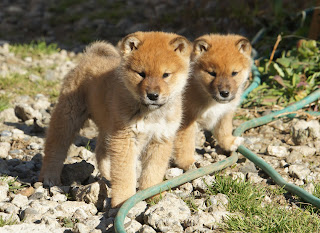 The Shikoku FCI standard describes the breed as: “A medium-sized dog with well balanced and well developed clean cut muscles. It has pricked ears and a curled or sickle tail. Conformation: strong, well-boned and compact.” Dogs stand at 49-55cm and bitches at 46-52cm (NIPPO, JKC). There are four accepted coat colors in the standard: goma (sesame), aka (red), kuro (black/tan), and shiro (white/cream). White is not desirable in the Shikoku and is penalized heavily in the conformation ring. Black and tan is not very popular in the show ring and the breed in general as it is difficult to produce correctly marked dogs. However, some Shikoku breeders in Japan will keep some in the breeding programs to maintain darker colors and thicker coats in their blood lines. The black coloration was especially prevalent in the original Hongawa dogs. There are three types of goma (sesame): kuro-goma (more black than light colored hairs), aka-goma (red base with black hairs mixed in), and shiro-goma (white base with black hairs mixed in). Like all Nihon Ken, the Shikoku has a double coat made up of coarse outer guard hairs, and a thick fine undercoat that it sheds seasonally. All Shikoku should have “urajiro” markings which are markings of a white or cream color presented on the ventral portions of the body and legs, as well as on the cheeks and brow of the head.

The Shikoku is more eager to please its owner than some of the other Nihon Ken, but is still an independent thinker and often will not listen or ignore commands. Shikoku can be territorial and make reasonable watch dogs, but are not by nature guard dogs or protection dogs. The Shikoku Ken is one of the rarest of the Nihon Ken, with national yearly registrations of 200-300 puppies. The number of Shikoku in Japan is estimated to be between 4000-6000. The main breed registry is run by the Nihon Ken Hozonkai (Nippo).

There is still limited data available regarding genetic health issues in the breed. Some conditions that have been seen in the Shikoku are panosteitis, immune mediated polyarthritis, hip dysplasia, split or abnormal heats, allergies, entropion, luxating patella, male infertility, pyometra, hypodontia (uncommon), epilepsy, and cryptorchidism (uncommon). There have also been several individuals with a severe neural disorder (Lipid Storage Disorder) that is chronic and terminal (generally fatal at between 3-5 years). There has now been one Shikoku diagnosed with cleft palate.