Day 2 was back in mid December. I was so busy at the end of the year that all we got in was 1 day in November, and 1 day in December.

If you want a hike, we can do that, but you will most likely not be able to keep up enough to see the boar, or get to the culmination of the hunt. I've finally had to accept this fact. I don't control the mountain, so anytime I take someone, they'll generally keep up for a bit, but if Baron and I get on a boar, I have to go.

So, we did this. The two older gentleman walked with me, but I had to leave them when Baron got on the boar. I caught up, the boar was stopped in some thick sasatake (thin bamboo).

He popped out once, and I had a head shot lined up, but no backstop, meaning I couldn't see what was possibly beyond him downhill, and I couldn't pick out exactly where Baron was. So I passed. The boar retreated into the brush, Baron bayed, I took video, it slipped away out the back eventually. I hunted the mountain back toward the older gentlemen and my hunter buddy with our two friends (who were waiting in ambush), but no luck. The gents said there goodbyes, and the remaining four of us switched mountains.

We got on boar a few times, Baron wiped himself out a bit, but at the end of the day we had our best chance yet. Baron was tracking through insanely thick brush, I was crawling for hundreds of meters on a steep slope overlooking the ocean, and he finally stopped the boar. I got to where it was within 2 meters of me, but there was this clump of 2 meter high grass it was in, and Baron was above it, tail wagging and inching closer. I couldn't go straight in as it was a clump of high ground, which meant all I could try to do was circle around the bottom. I'm on the game trail, and if I step forward, I'll basically be able to touch the boar (and find out how big it is). While I'm pissing myself trying to work up the courage to just go for it, Baron jumps in from up top and grabs the boar. It wasn't that big, around 40kg. Problem is the slope is so steep they go tumbling down, I can't shoot cause they're cartwheeling together, and the boar gets away. Baron was wiped out, not enough strength to give good chase, my knees were dead, and we lost sunlight.

One interesting moment was when we flushed 2 deer. Baron had no interest. I know he used to chase deer for a bit if we ran into them, and I'm sure given the right circumstance he would do it again, but it seems he knows it's pointless. That's happened twice this season, so maybe the old man is changing.

Anyways, we still had fun, and of course plenty of exercise. I thought I might write about a few more days, but nah, gonna go build some fences. Later all. 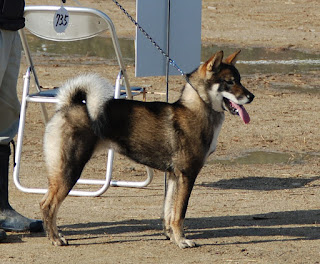 It's always a tough decision trying to decide which dogs/pups to keep. It was a lot easier when my dogs were just pets. I chose them, and that meant I planned to keep them forever. Now that I'm trying to keep dogs for a 'program', and for two breeds (Shikoku/Kishu), the decisions are much more complex. Trying to balance keeping the right dogs, plus keeping down the number of dogs I have at my house is tough.

To add to that I've got osteoarthritis in my knees which is degenerative, so I have to keep that in mind. Until I've got an easier way to exercise my dogs that doesn't involve walking them all on foot twice a day, I have to keep the numbers manageable. 1 breed would be easier than 2, and since I never really planned for a full fledged Kishu program, they always take the back burner when it comes to numbers.

I kept two females from my Baron x Tenko litter, thinking to hunt them in the future, but originally I hadn't planned to keep any of the pups here. 2 of them will be with local hunters anyway, under agreement that they work with me in the future, and if the pups turn out to be good breeding stock, I get a female back.

As luck would have it I just got a call yesterday that 2 Shikoku pups from proven hunting stock will be gifted to me. I've been wanting pups from this line for a few years to try out, and now there are some available. They'll arrive tomorrow haha. So once again, I'm here making difficult decisions regarding which dogs it is most important to keep here.

I've got some exciting plans for this year, and once they're rolling I shouldn't have a problem having a few more dogs around, but for now I have to stay realistic. In case you're wondering, I own 6 dogs at the moment. 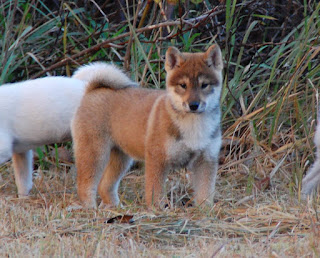 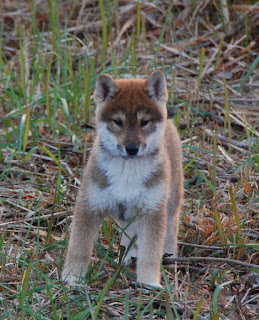 Dekisugi is a Japanese term that roughly means 'too good to be true'. We use this in describing pups that are too balanced at too young an age. Often pups like this end up being too small, or losing proper balance in their face as their skeleton matures.

This is not a hard fast rule, but is something to be aware of when picking pups. I've used as an example a pup from my last Shikoku litter. We'll see how she turns out, but she does worry me just a bit since at 2 months she already looks 'finished'. A pup should have room to grow into, something we describe as 'nobi' (length).

Anyway, that was just a random thought I had as I looked at these pictures of Kaori. The good news is she's close by so we'll all get to see how this experiment works out.
Posted by Kato at 11:36 PM 4 comments: