This video came up on my Youtube, so I gave it a look.


I can appreciate their shooting skill, and understand that trying to keep up with wild boar that are damaging the environment is difficult (and culling usually necessary), but honestly I'm pretty put off by hooting and hollering about killing animals. Yes, there's an adrenaline rush when hunting, often just due to the danger involved and the tense build of pressure to get everything perfect, but you're killing living creatures. A little respect for the animals maybe? I'm anti trophy hunting as well, so I'm the odd hunter in the barrel.
Posted by Kato at 3:58 PM 3 comments:

Last week I headed to the airport again. This time there was even more travel involved than usual since I had to head down to Osaka to fly out of Kansai International Airport. So it was bus to Tokyo, 'shinkansen' (bullet train) to Shin-Osaka, train to KIX. Since the flight was an early morning flight I had to book a hotel and travel to Osaka a day in advance. I met up early the next morning with the 3 dogs I was transporting to Europe, and though there was a little drama regarding the export paperwork, everything worked out in the end.

I arrived in Germany, handed one dog over to its owners, and then had some coffee with some childhood friends at the airport. They just happened to be flying into Frankfurt on the same day, and it was nice to catch up. A few hours later my ride to the Netherlands arrived, and with two dogs in tow we began speeding through the night on the Autobahn. We arrived late, stayed up a bit chatting with friends, and then slept for a few hours. In the morning we walked all the dogs, and headed to Amsterdam to see the sights.

I really liked the atmosphere and the city, everything down to the loads of young weekend tourists, street musicians, canals, deadly bicycle riders, crooked houses, and coffee shops. Yes, we even went to take a look at the red light district which I found not overly exciting, but surreal.

The next day we were all off to the NIPPO Show Holland 2014 where I was translating and helping Mr.Iwasa judge the Shiba, Shikoku, Kishu, Kai, and Hokkaido. I'll post about that later. The next morning we were off early again to head back to Frankfurt for the return trip. I had a bit of luck at the airport. When I arrived at check in, airline staff informed me they were overbooked and I didn't have a seat. For a moment the tired human in me wanted to get a little pissy about it, but I chucked on the headphones and chilled out. These things happen. A few minutes later staff approached me and said they could get me on a later flight to Tokyo AND give me a 600 euro voucher. Of course they had no idea I wanted to get to Tokyo anyway, so it all worked out perfectly. Fantastic luck if I may say so!
Posted by Kato at 4:14 PM No comments:

Japan in the Summer

You can't miss the Hanabi (fireworks)! This is the Tateyama city fireworks festival near my house. It's one of a kind in that they fire them from barges out in the bay from multiple locations, giving you a lot more than one static spot in the sky to look at, and of course there's beautiful reflections in the ocean. 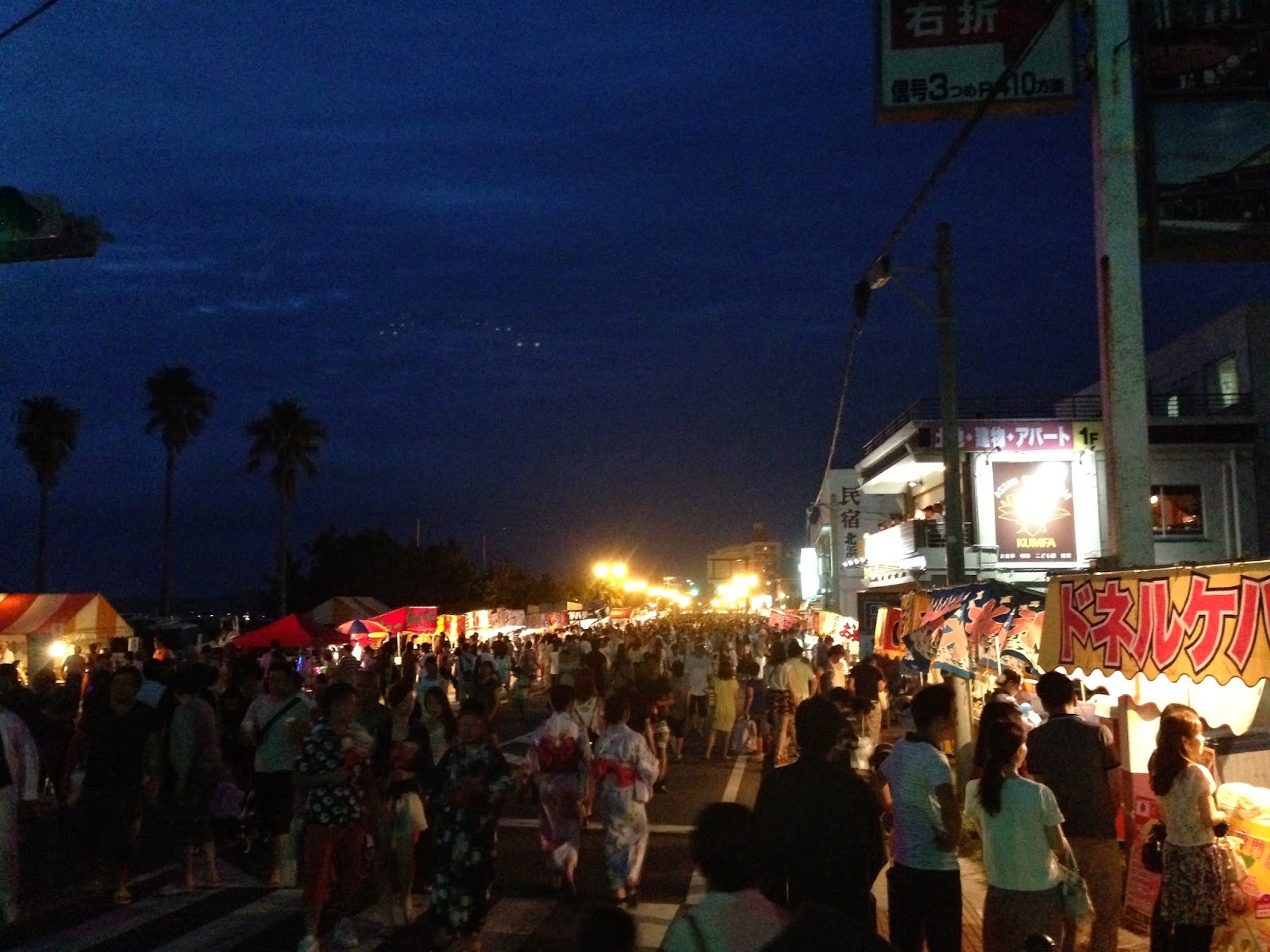 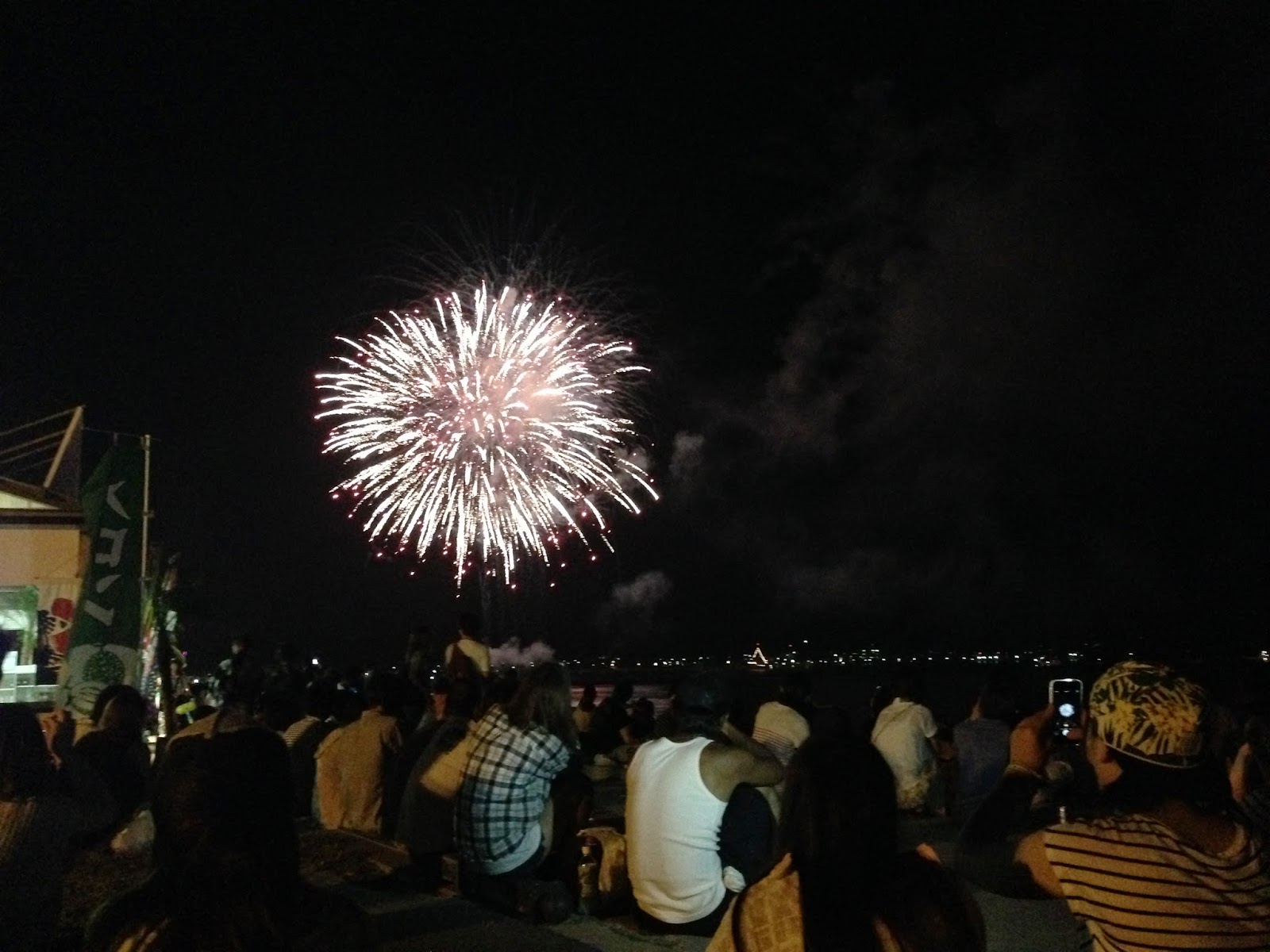 If you're visiting Japan, and heat and humidity are not game breakers, the summer festivals and fireworks are amazing. Fun and culture abound, and every year I am overwhelmed by how much I love the changing of the seasons in Japan, and the way they are celebrated. At the matsuri there are loads of 'yatai' (outdoor food stalls) selling festival fast food, girls in kimono, families, couples, and generally seas of people having a good time.

This is the location for the 2014 NIPPO Grand National 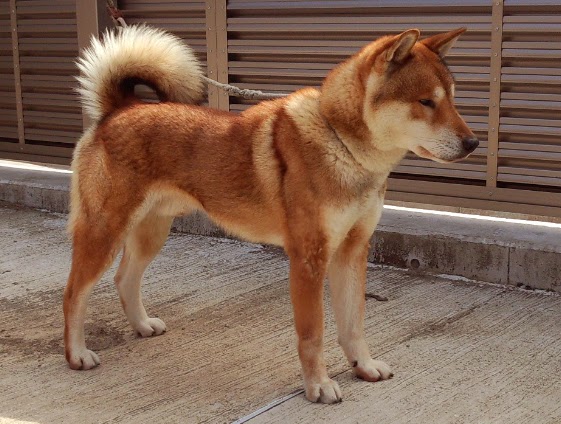 I'll be there as usual, but busy since I will be showing a Shikoku (not sure which one yet). The picture above is of Kotofusa Go. I showed him last year to 6th place, but I think we've pretty much decided to retire him. 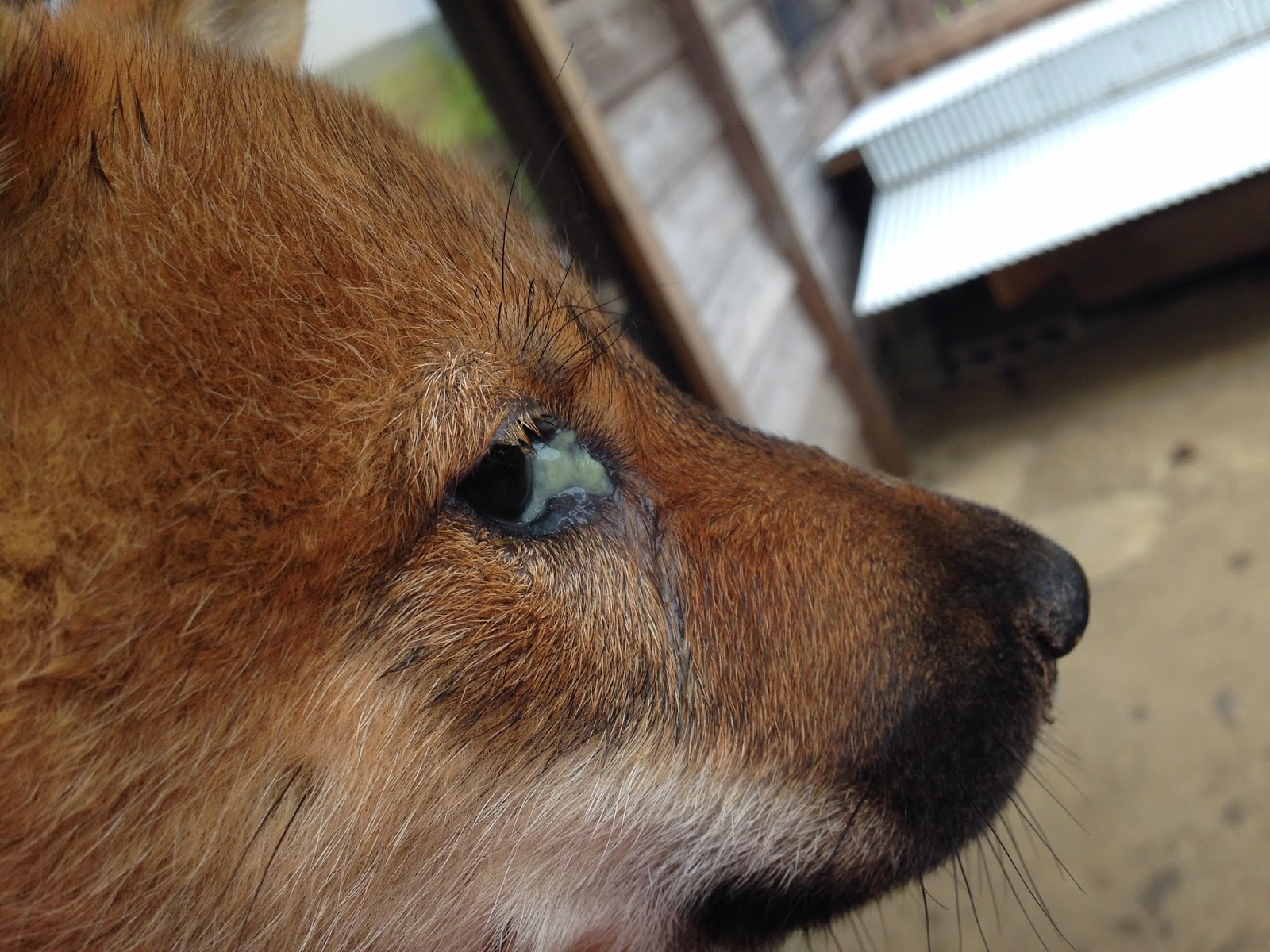 So after the Koto x Hime litter got their first round of multi vaccinations on the 4th of July, next morning this is happening to Koma's eye. I had some anti biotic eye drops around from treating another dog earlier in the ear, so popped that in once a day for 2 days, and it seemed to clear up. Then, it came back with a vengeance, so off to the vet. 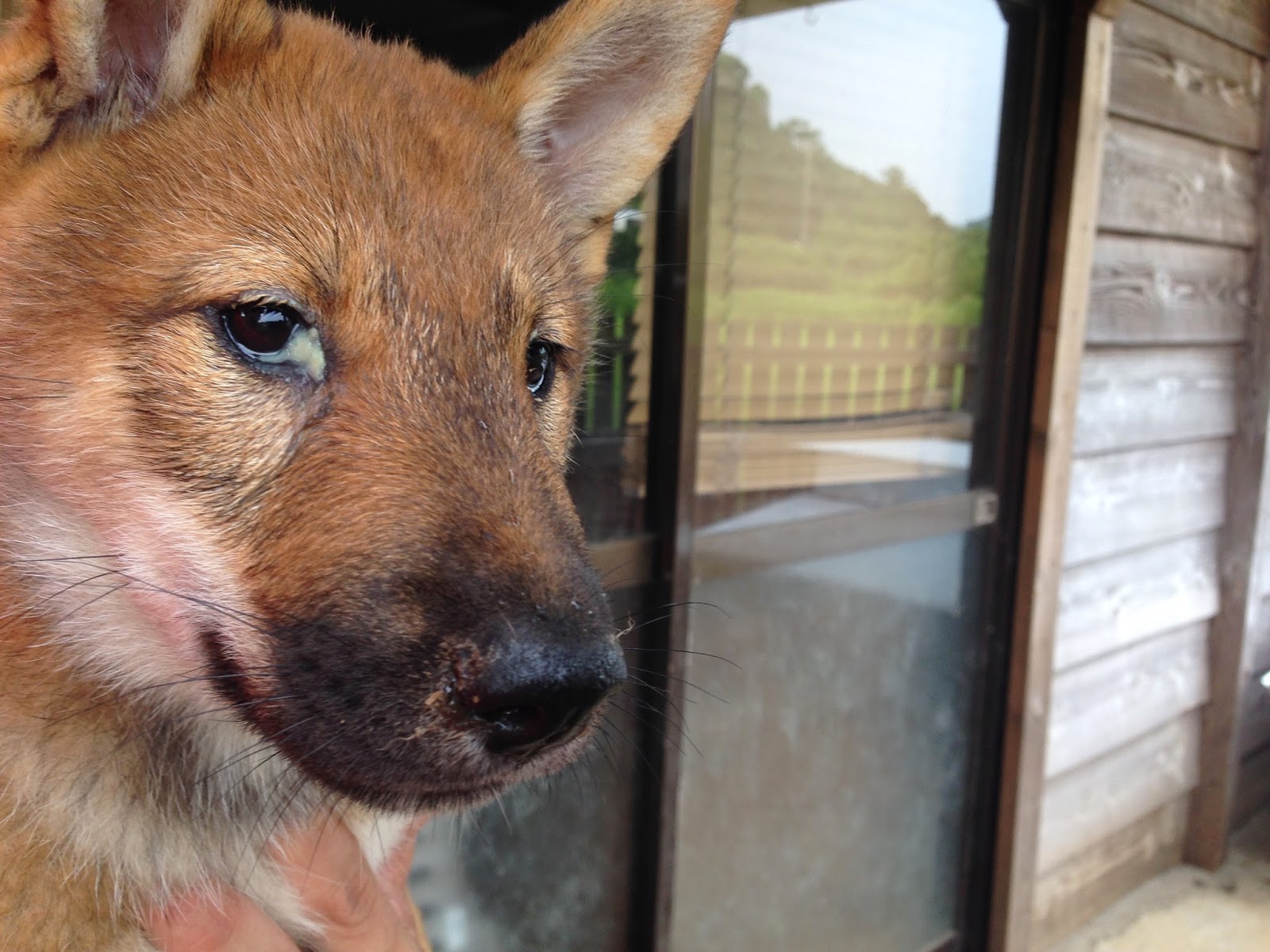 The discharge would cake his entire eye and get all crusty in the morning, and he had a lot of discharge out of his nose as well as you can see in the picture. At the vet we did all manner of checks and tests, there was no eyelashes hitting the eye, no damage to the eye, but their was an infection, and the tear ducts were clogged. 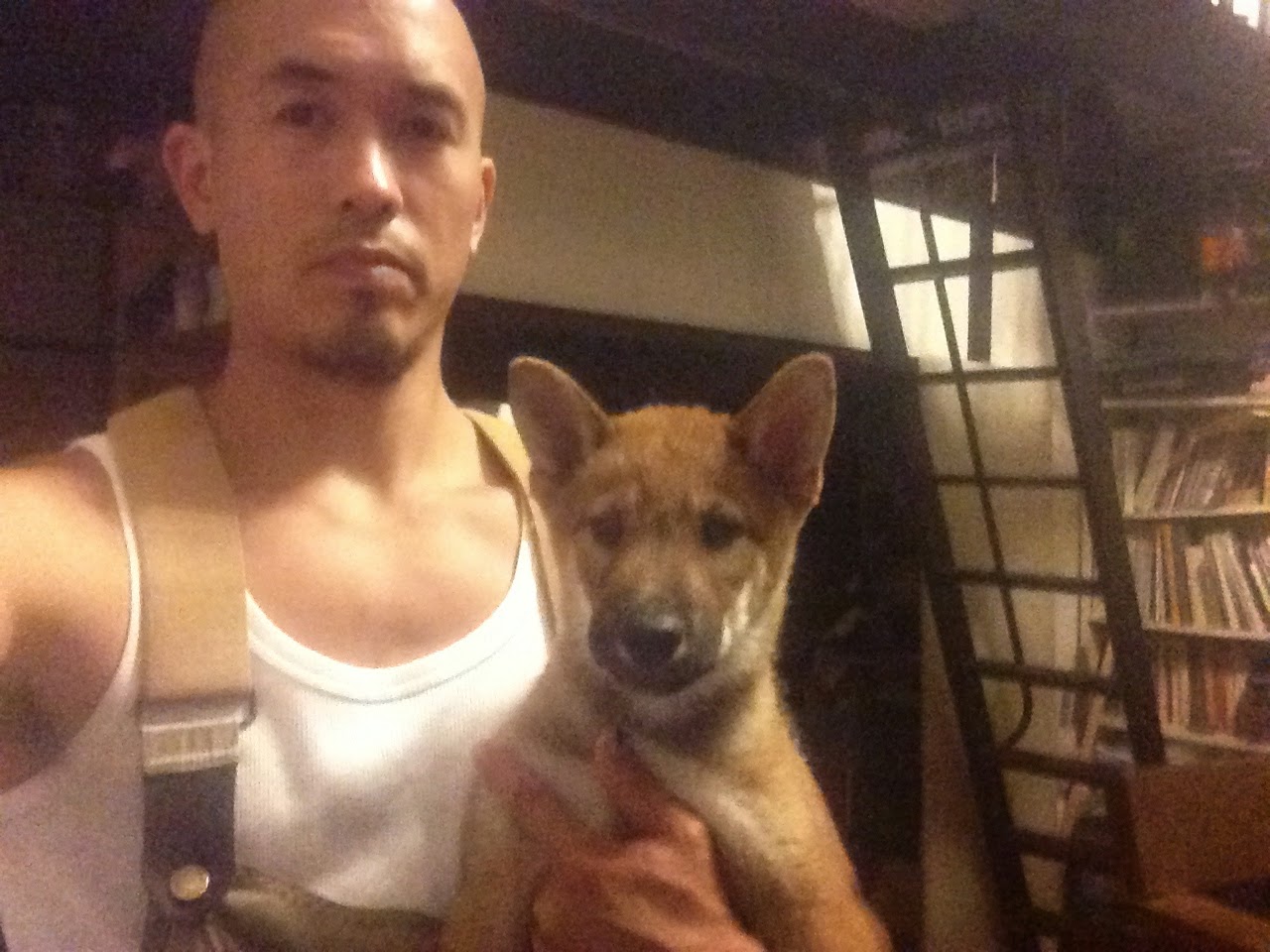 We switched anti biotics, added a steroid drop, and after days on this the condition was just getting worse. We went for another check, and still nothing. I added an oral anti biotic to the mix, and after a few days the infection was under control. His eyes are still watery, I think the ducts are still clogged, and there's still a bit of redness, but nothing like the massive amounts of gunk that were pouring out of his eyes and nose. I'd clean his eyes and 5 minutes later they'd be full again.
Posted by Kato at 12:14 PM No comments:

A good friend of mine just opened a shop on Etsy selling antique and vintage Japanese items. I like what he's put up there so I'm giving him a little shout out on my blog. Since I know Hideo speaks English, I'm pretty sure he'll ship overseas. 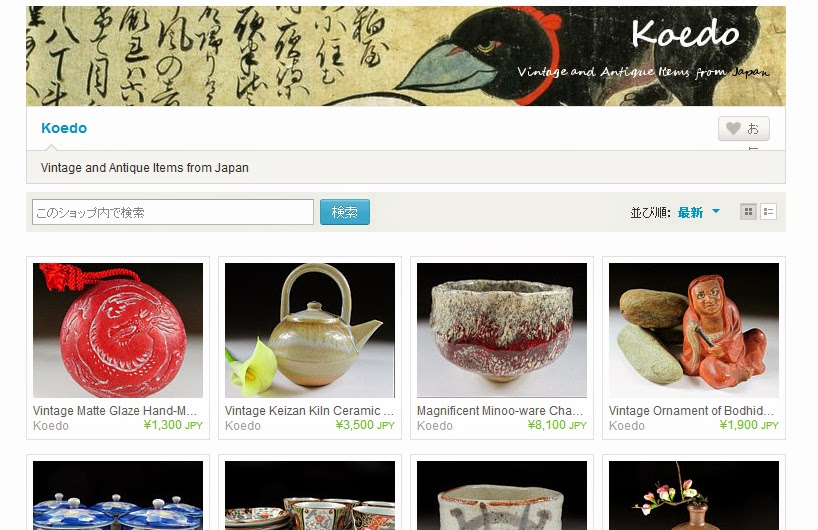 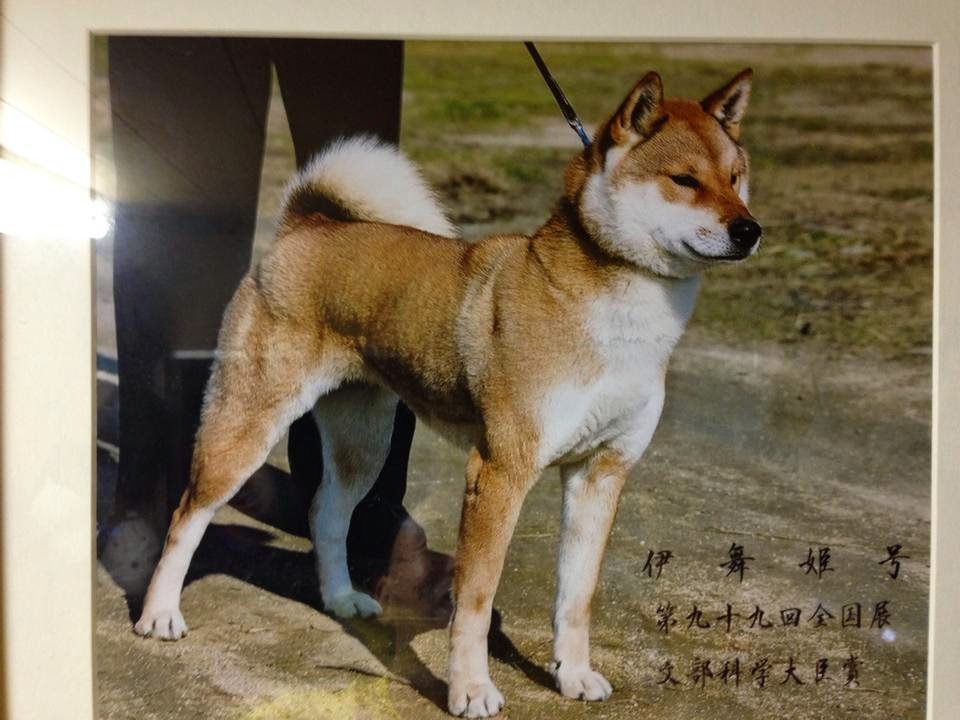 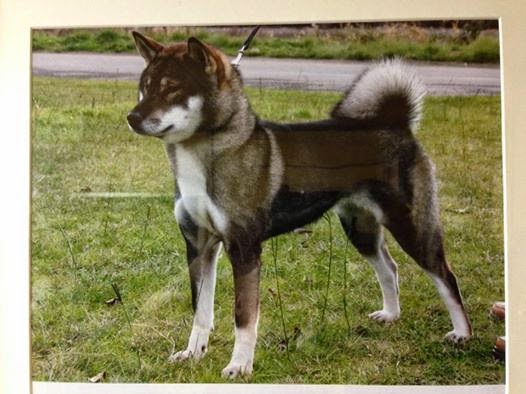