I been busy. Hunting season opened on November 15th, but all I had managed till yesterday was a 2.5 hours of hunting with Baron (Kishu) and Rin (Shikoku) on the afternoon of the 16th. It was nice weather, warm, but not sweat inducing. We drove 5 minutes down the road, the boar are everywhere now, and got into the mountains. First little hill was empty, so we started into the 'back country', which means we walked for a few more minutes.

About 30 minutes in, I heard some squealing and a ruckus in the gully to the left and below us. I knew the dogs were on the opposite side of the ridge, so my brother and I were scratching our heads for a few minutes. The dogs came back, and as they did the noises started up again. Monkeys, fighting in the ridge opposite. They were really going at it, and the dogs took off toward it. We waited a bit, then headed over to see what was going on. The monkeys were still around, but Baron was done with them. I knew there was a boar nest nearby, so we walked toward it.

I was hoping to hit it from above (always easier that way), but in the finger ridge before the one with the nest, Baron went straight downhill, and then up to the boar from below. And started his low bark. Rin was still with us, but ran down to see what was up. I was out of position, but started moving closer. The vegetation was not so thick, and there were clear spots from about halfway up the ridge. After around a minute, the boar broke out, and wonder of wonders starting crashing through the underbrush in our direction, but below us in the gully. I got one second where it stopped to wheel and look in the direction of the dogs, and the boar was around 30 meters out. Lined up a quick shot, but it missed, and the boars and dogs were off for a while. That was pretty much the end of the day. We walked out and headed home.

Fast forward to December 12th. We're still busy, but it's time to put a boar in the freezer since we're almost out of meat. My brother and I take care of walking/feeding/playtime of the 13 dogs at the house, and after getting a bit of work in, we prep for the hunt and head out after lunch. Again, 5 minutes down the road, same area as last time, starting with the same little hill. It's got fields on three sides, and there's a lot of crop damage so the farmers are always asking me to come down and clear it out. More often than not there are boar sleeping in this tiny round nob of a hill.

Sure enough, a two minute walk to the top, the overly enthusiastic dogs are gone, and before there's a chance for anything to really happen I hear Baron's low first bark. It's on. From there the video starts. Get ready for 4 minutes of bamboo and motion sickness courtesy of my GoPro.


Karen really went for it for the first time, she was baying like crazy, and the two dogs worked really well together. The boar didn't get a chance to go anywhere, and didn't even notice me and my brother thrashing through the bamboo on top of him. I got to within 5 meters or so of the dogs (white dogs are great, high visibility), and followed their line of sight to me left where a huge black furry wall was standing and chuffing. I lined up the shot, lined it up again, squeezed, and the boar dropped cold. The odds of a single shot taking down a huge boar (I could see he was massive) like this are pretty low, so I was trying to rush to get into position for another shot if necessary. He was still for a few seconds, and then kind of half rolled a few meters down hill, but the dogs were on him grabbing ears and legs slowing his descent. He only got a bit further downhill and gave up the ghost. The slug had come through behind his head, through the upper right shoulder and vitals and lodged in the rib cage on the other side.

The dogs were pretty amped up, as were we at getting a huge boar so quickly. Fastest, cleanest boar hunt ever, with the dogs pulling off a perfect job. We cleared a path through the bamboo and hauled the boar out to the road which was 100 meters away. Getting the boar into the car was a bit of a feat, as was hanging it to weigh it. 125kg strung up, a record for me solo hunting with my dogs. I was on a hunt once where we got a 147kg boar with 2 other hunters and their dogs, but it's definitely a different experience to take one with just one gun and your own dogs. All the neighbors have been coming around to see the monster hanging up. I'll be butchering him tomorrow, probably mostly hamburger and sausage meat due to the boar's size, but he doesn't stink that much, and he's super fat so fingers crossed.
Posted by Kato at 10:40 PM 4 comments:

Little Kaze and Yama at 2.5 Months 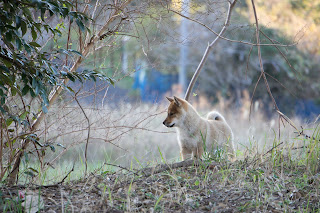 I just got back from a trip to the States last night, so took the time to get out a bit with the pups this afternoon at sunset. Shot a few pictures, took some video. This is Kaze, one of the females from the Bunta x Chacha litter.


Below is her brother, Yama. I'm still looking for a home for this guy. He's got the best eyes in the litter. 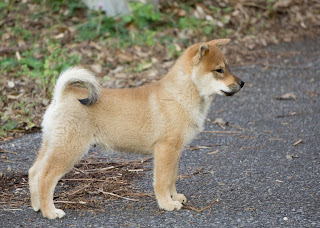 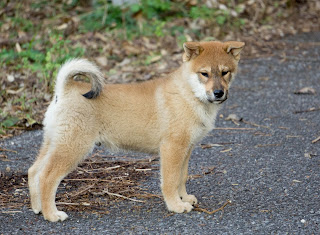