Messed Up the Knee

Yup. Out surfing massively tiny surf the other day, slipped, and twisted the knee. Ridiculous really. It hurt for 30 seconds, after which I imagined I could keep surfing, which I did for another hour or two. The badness only kicked in after a 2 hour drive. One step out the car and I knew I was in trouble.


Had a lot of plans, but nature had some others. I'm enjoying the change of pace, working on some slower stuff, enjoying the flow. Maybe I'll get that kitchen done! #meniscus #mcl #2footSurfisKiller
Shigeru Katoさん(@katothewalrus)が投稿した写真 - 2016 10月 26 10:20午後 PDT


The timing is sucky since it's preparation time for the NIPPO Grand National and the hunting season, but it is what it is. I'm actually not really bothered since I realized nature's decided I should slow down a bit, and I'm going to do all the slow things for a while. Feels good to flow with the go of things instead of fighting to have them my way.

Anyway, the brace keeps my leg functional, functional enough to get some work done on my kitchen! The bones are okay, MCL not looking good, maybe some meniscal damage. MRI scheduled in a bit. Fingers crossed!
Posted by Kato at 7:57 PM 2 comments:

So there are two little Yushoku Kishu sisters here at my place for awhile. They're on their way to some friends over in the US. The parents of these pups have some good hunt in them (I've seen it firsthand).


And then there were #kishu #puppies #japan the neighbor's kids just dropped by to play
Shigeru Katoさん(@katothewalrus)が投稿した動画 - 2016 10月 21 8:38午後 PDT


If I have some time I'll snap some pics and take some more video. I had to pick them up a bit earlier than I would have liked (around 50 days old), but luckily Chacha just finished with her litter (and a runt from another litter that I added), and now she's taking care of these two little buggers. Females with mothering instincts and easy temperaments are nice to have around.
Posted by Kato at 10:28 PM No comments:

This is Chouhou Go, out of Kotofusa x Rai (Orin). He was bred over at Nidai Iwahori Sou, the only pup in the litter.


He's got a different type to him than the other dogs we have around, and Orin is a different pedigree from our dogs so it's good to see him turning out. It's a tricky thing to pick a dog as a pup and believe in that choice, sticking through the gangly phases of puppy hood with confidence in the dog's potential (and your eye!).

This guy is owned by Mr.Iwahori, his breeder, and the pic is from the Chiba branch show where I handled him to second place. He's entered in the national as well.

I love making furniture out of Keyaki (Japanese Elm). The grain, the colors, the solid weight of a slab that can obliterate your toes...


The wood for this table was rescued out of a dump almost 15 years ago. Many hands had a go at turning it into a table, and for the better part of a decade the pieces sat in storage. As luck would have it I saw the wood in the back of a truck on the way to a thankless new home, and wrangled it free. Here it sat for a year, and then last Sunday a friend and I went to town on this beast.

It now resides in a friend's minshuku (Japanese style inn) in Onjuku, a wedding gift that will probably outlast the both of them haha.

I'm not the most skilled woodworker out there, and never the hardest working, but if I get inspired and start rolling, best just step back and give me space (or a hand. advice is welcome to). 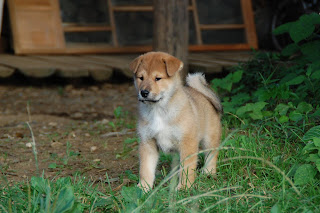 The Masamine x Chacha pups are 52 days old now, but I took this pic several days ago. Their ears are on the large side it would seem, and they're just starting to make an attempt to stand. Size aside, Shikoku ears are supposed to take a while to stand, with oldtimers commenting that it's odd how fast pups' ears seem to stand nowadays.

I'm down to 15 dogs now.  8 are mine, 7 are pups. It's a management program taking care of this many dogs and managing trips into Tokyo, surfing, hunting, working, but this round is going pretty well. While there's usually a fair bit of stress involved, I'm enjoying these cooler autumn days chilling with the pups. They're all very well behaved, toilet training going well, fairly quiet, fairly non argumentative with each other, and everyone's pretty healthy. Knock. On. Wood!

The NIPPO Santama branch was held in Hachioji on Sunday. Apparently it rained cats and dogs till around 11am. Lucky I showed up at 12! I'd had a long week and needed to catch up on sleep. After handing two pups over to their new families, I caught the tail end of the show. Was quite pleased to see the number and quality of Shikoku that are in Kanto now. I think we're doing pretty good, and next month's grand national should be a lot of fun. 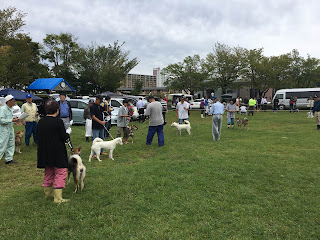 I've seen this male since he was a pup, and he's fast becoming my current favorite Shikoku male. While I obviously have yet to take a decent picture of him, he's amazing in person. 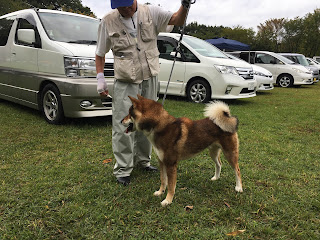 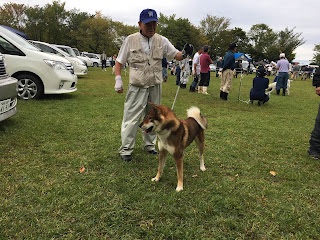 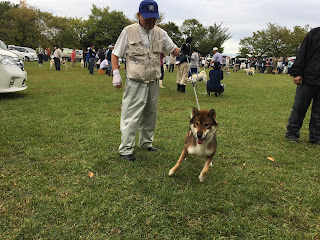 I know these are just waiting to be meme'd. My friend's Akita pups were just too tired to say no. 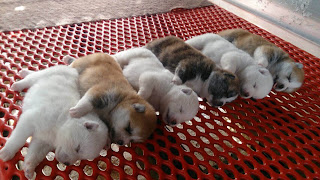 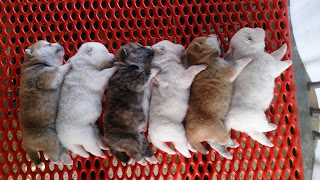 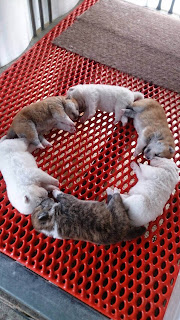 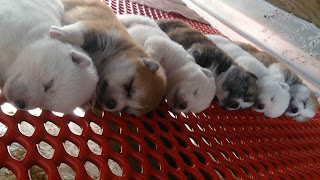 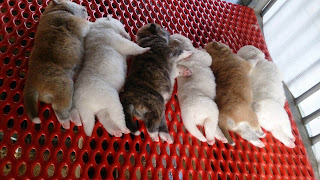 How Do You Change a Dog's NIPPO Ownership? 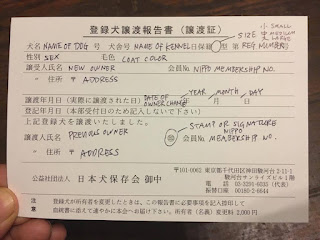 Then you as the new owner fill out the rest of the card, and send it in to NIPPO along with 2000JPY and the original pedigree. And there you go. A few weeks later you'll receive the new pedigree in the mail. Just note here that you must be a NIPPO member to have a dog's NIPPO ownership transferred to you.

There were some great points made in the comments by @Éadaoin about NIPPO ownership and registration, so I'm editing it into this post.

Probably worth pointing out too thata) You have to be the registered owner of a bitch to register her puppies in your kennel name with NIPPOb) You have to be the registered owner of a stud dog to sign for his matings in NIPPOc) A JKC export pedigree is not proof of ownership in NIPPO so you MUST get the stamped transfer card from the previous owner when you import a dog from Japan, otherwise no NIPPO puppies for your stud or brood, andd) Don't rely on an import agent or translator to know (or to care about) these things at the point of sale. Be sure to ask for it. It may be very difficult to get back in contact with the previous owner once the dog has been exported, if you realise later on you need this done. I've seen people make this mistake again and again.
Posted by Kato at 9:34 PM 7 comments:

5 Shikoku pups and a lawn. I could sit out here with them for hours before they bore #shikoku #shikokuken #puppy #japan
Shigeru Katoさん(@katothewalrus)が投稿した動画 - 2016 10月 2 7:01午後 PDT


Wake up at dawn to wailing puppies. Check. Well I did get some more sleep after taking them to the toilet. Got some work in on the computer, walked all the dogs, played with puppies again, took Masa out into the mountains to chase boar for an hour, got soaked in the rain. Of course he is now making it a habit to roll in stink just before getting into the car. Literally while I'm packing gear in the car he saunters over and finds something nasty and rolls. But we're still buddies, and he's still here in the house watching Netflix with me. Time to go out into the pouring rain (typhoon coming again) and walk all the dogs again.

It's been a while since anything Kai related went up on the blog, and since I was scraping around in my Kai files and doing a touch of research I thought I'd throw these up on the blog.

Mr.Yanagisawa was a extremely influential in the Kai as a breed from its very early days. While he lived in Nakano, Tokyo, he wrote many articles about the breed and worked hard to push for its preservation as a hunting breed. While he passed away a while ago, his family still runs the shop (at least they did last time I looked which was a few years ago). Mr.Yanagisawa had a famous male named Komarou who ended up being an amazing hunting dog. The dogs of his line were named after this dog, so are referred to as 'Komarou Kei' (Komarou Line).

Here's a few pics of three of the famous males, Komarou, Ichirou, and Gengorou. 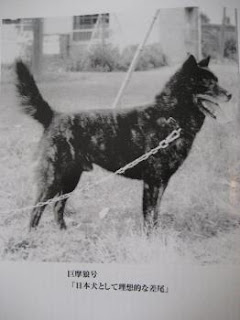 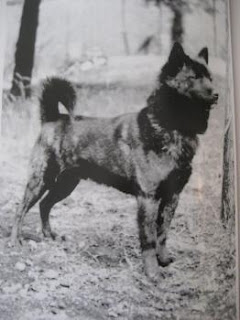 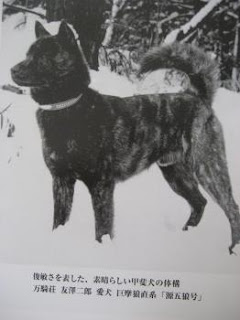 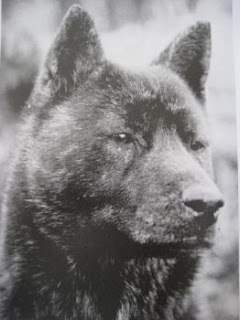 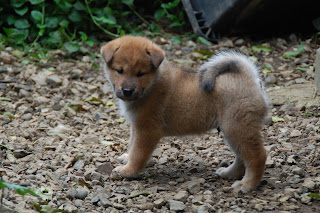 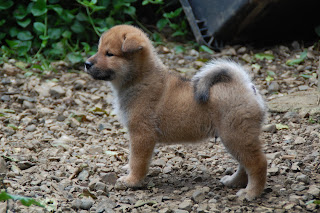 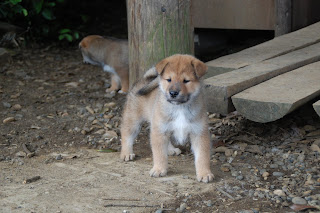 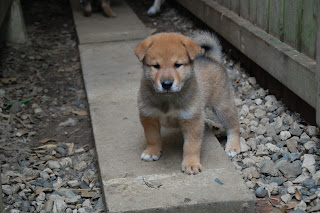 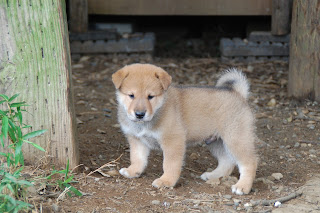 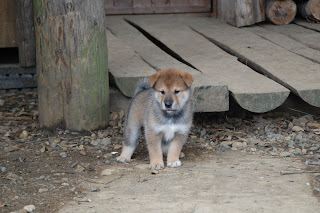 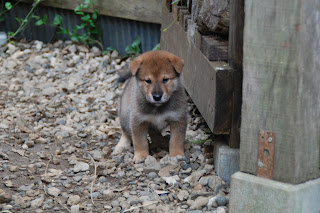 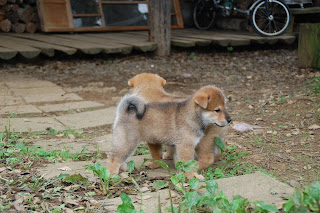