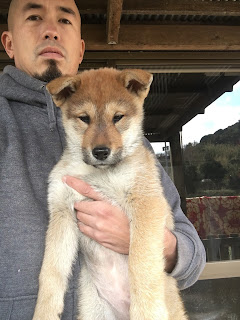 And this is Kaze 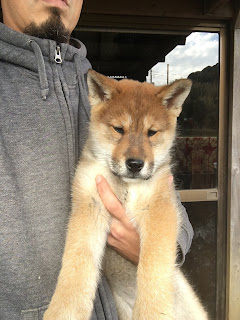 If you're interested in non-white, or 'yushoku Kishu' as we call them here in Japan, my good friends over at Hakuzan have 2 available. These dogs were being kept as part of their Kishu preservation breeding program, but due to some really crap luck their program is being shut down for the time being. As such, these two amazing dogs are available. If you're interested in owning/breeding/preservation etc, contact them directly through their website, or on Facebook http://www.hakuzankennel.org/#/
They can give you more details, and a breakdown of costs and contract.

Last weekend was the once a year NIPPO Grand National. It was held in Wakayama city, an 8 and a half hour drive away, next to a picturesque marina. After prepping the camping gear and dogs I swung through Tokyo to pick up my good buddy Mark the beard. We had Masa and Bunta with us, a little variation on last year when we had Masa and Cho (Bunta's sire). Bunta is in the wakainu 1 class, Masa has moved up to the Souken class.

We had shown both males at the NIPPO Chiba regional in September. Masa was in terrible shape at the time, full coat blow and out of shape after a hot summer where we weren't in the mountains at all. 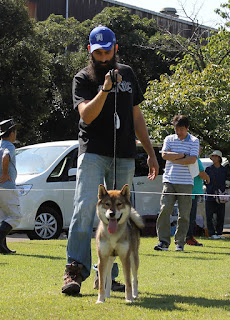 I was seriously considering not showing Masa on the day, but my shisho (mentor/sensei) said it's funner for everyone else in the class if there is more competition so why not show him even if he's not going to win. In the end Mark showed him well, and he took third place. The first place male is a very red sesame owned by Shibukawa Kato Kensha, the same male that Masa placed second to at the national last year. In second place was Masa's half brother, a black sesame also sired by Kuromasa. 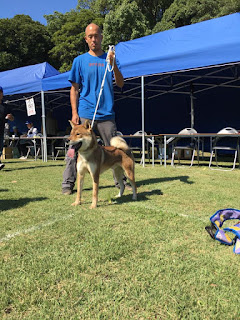 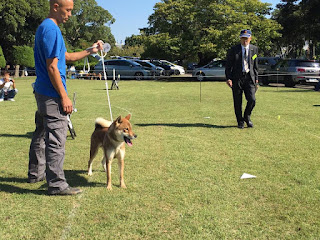 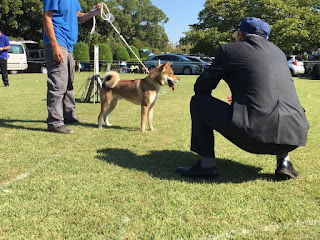 There wasn't much competition, Bunta took 1st in the wakainu 1 class, and we got some practice in the ring.

The big take away from this show was the fact that the Souken 1st place male (and our eternal competition since he's always been in the same class as Masa) was in peak condition, with the national still 2 months away. The gears in my brain started turning, and I told Mark that the competition seeing Masa in such bad shape could possibly get a little complacent, whereas I was just getting ready to whip Masa into shape in time for the national.

I took the boys to one more show before the national, a typhoon soaked Sunday afternoon at the Tokyo regional. Masa decided he hated being drenched, showed poorly, and ended up in last place. Bunta was called to first place in his class, but then had a mini freak out at the dog in second place, so we were dropped to second. That was a bit stressful since it was totally a handling error on my part, and you don't want things like this to become a habit.

Anyway, after the Chiba show Masa and I started our routine of roadwork on the mountain roads near the house, 3km downhill and 3km uphill. I try to do this run every other day (it's not a walk, he's running the entire time with some sprints in there). Since Masa's offleash when we're doing this, sometimes the process involves chasing some boar or 1 time, a pod of monkeys. Everyone that I talk to about our workout is shocked that I'd put him out there where he could be injured before the national, but hey, these dogs are hunting dogs first and foremost.

Fast forward to Friday, and we leave Tokyo around 9pm, drive through the night trading off, having a few chats and laughs, and get off the expressway at just after 4. Our gas tank is blinking empty, but the gas stations are all still closed so we head to the venue, and after a few spins around the block we find the entrance to the parking. We break out the tent and other gear, get the dogs walked, and sleep for 3 hours. Well we sort of sleep since people and dogs are arriving all night long, and the ones walking their dogs close to our car were customarily barked at by Masa and Bunta. It had been raining from the night before, the third year running that it's been pouring rain for the medium size breeds at the national. I guess we're used to it now.

The opening speeches and introductions of judges etc started at 9am, and we figured out where our rings were. Bunta was up first, did great in the ring up until it was his turn in the middle. Bunta was the oldest dog in class, so he was the last one judged which meant he was in an empty ring, got bored, and stopped stacking. Anyway, after we were done I went over to help Mark with Masa in their ring. Masa was in pretty good form, though his stack was a bit off as he was going back to his old habit of bringing his back legs forward (you can see that in the pictures). With the 10 best Souken males in the country in class, and only the top two placing, we figured the odds of placing were pretty low. If we were called to the first group in the afternoon we would be happy. 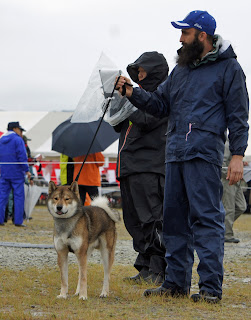 After the morning judging was over, we decided to get the car over to fill up the gas. Mark took that assignment and 500 meters out the car ran out of gas haha. With a bit of help from the other members of the Chiba branch, we managed to laugh our way through that debacle and zip back just in time to get ready for the afternoon comparative judging.

Bunta was pretty antsy with so many males in the ring close by, and tried to pull his move from the Tokyo show, a few lunges and barks which I managed to control. Still we ended up in 5th place first, and then on second pass the judge switched us up to 4th. I scooted over to Mark's ring right away, Masa was focused (on me mostly haha) but we worked that, and all us friends ringside went into a mini shock when the judge put Masa in second place. 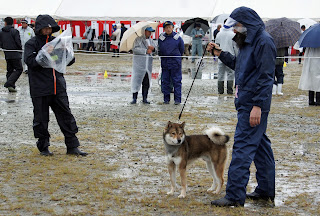 We had ended up ahead of our eternal nemesis, which was pretty shocking, but we'll take the win. Masa in 2nd place at the national 2 years running, in the wakainu 2 and souken classes.

It was great to see friends and their dogs at the national, and while we originally planned to stay for Sunday and the Shiba as well, we were wiped out so got a few hours of sleep and drove back. It turns out several of our friends did really well on Sunday, so that was great to hear. The top two Shikoku on Saturday were both out of the legendary Yano-san's lines, some of his last breedings he did before he passed away.

Thanks to all our friends and mentors for their advice and support. Mark and I being the young guns in the Chiba branch are just standing on the shoulders of giants, gentlemen who have been preserving these breeds for decades and generations.
Posted by Kato at 11:24 AM 2 comments:

The Bunta x Chacha pups are 2 months and kicking, and I had a chance to snap some video.


I've got serious puppy overload at the moment. The only thing for it is to sit on the floor and let the pups crawl all over me till all the stress involved in caring for multiple litters passes. If anyone's looking for Shikoku pups, I might have a few haha.
Posted by Kato at 1:26 PM No comments:

I realized that there was a mistake in my listing of the Hokkaido Ken standard size on this blog. Oops. I just corrected it, but I mistakenly listed the Hokkaido Ken Hozonkai (the premier Hokkaido Ken preservation society/registry in the world) standard's size for the breed to be 48.5-51.5cm for males, and 45.5-48.5cm for females. That's the size the JKC and FCI list, but again (drumroll please) it looks like they fudged it up. The correct size is... 48.5cm at the withers for males, 45.5cm for females, WITH AN ALLOWANCE OF 3CM ABOVE AND BELOW these standard sizes.

The Hokkaido Ken is a medium sized, strongly built dog. They have longer thicker coats than the other Japanese breeds, and also have wider chests, and smaller ears. Like all the Nihon Ken, they have a double coat made up of protective coarse outer guard hairs, and a fine thick undercoat that is shed seasonally. The breed comes in several colors: white, red, black, brindle, sesame, and wolf grey (HKH). Many Hokkaido also have spotting on their tongues. The breed has prick ears, and curl or sickle type tails. Dogs should be 48.5cm, and bitches 45.5cm at the withers with an allowance of +/−3cm (HKH). The JKC/FCI standard seems to have missed the mark in their standard, since they list the size as dogs 48.5-51.5cm, and bitches 45.5-48.5cm. NIPPO lumps the Hokkaido into the medium size category which lists dogs at 49-55cm, and bitches at 46-52cm.

Just thought I should put that out there before I forget to blog it. 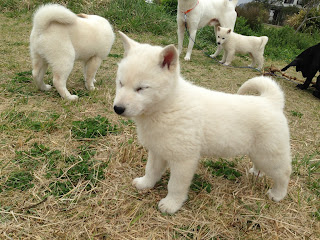 It's the first day of the hunting season, but I've got to get out to Tokyo for some work. I did spend some time snapping pictures of the multitude of puppies at my house. These two have a few interested parties, but they don't have solid homes yet. They were born on the 20th of August.

This first one is a female. 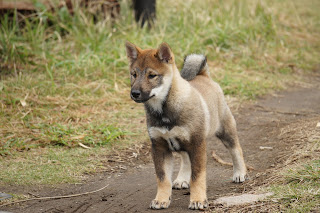 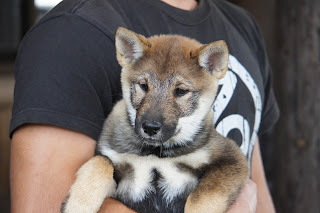 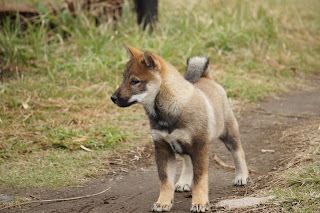 And then her brother, a red sesame male. 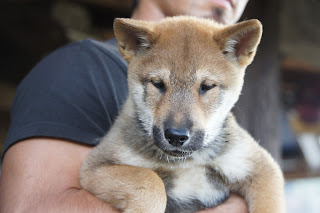 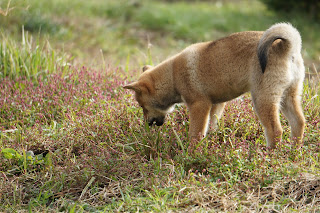 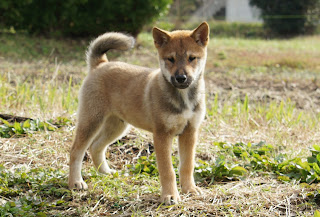 My email address is kato.the.walrus@gmail.com for anyone who's got any questions about them.
Posted by Kato at 11:12 AM 2 comments: