What You Look At

"What do you think of this dog?". The age old, loaded question, where one is expected to give a (hopefully) correct opinion. 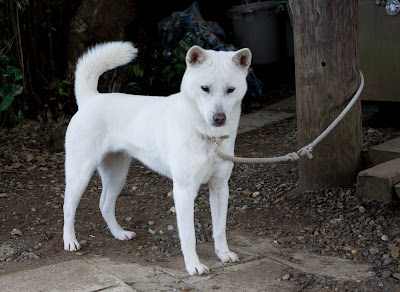 If you're an ordinary (or extraordinary) dog owner, you may be drawn to a dog's temperament, or vivid color. If you're a breeder, you might be drawn to its structure or type. A judge will hopefully be drawing on all of these points, along with knowledge of what the breed should be like. My point is that depending on who you ask, you will get a different answer. And that goes for judges as well. A NIPPO judge and an FCI judge will most likely place different weight on particular aspects of the dog.

My 師匠 (shi-shō) and I are always talking dog, evaluating dogs, and several years back now, we had a conversation about a certain dog. The word shi-shō translates to 'mentor' or 'teacher' in English. In Japanese however, it carries much more weight. It implies that the person being referred to is a true master of their craft. Their student would be referred to as their 弟子 (de-shi). This relationship shows great respect both toward the teacher, since the student deems them a true master of their craft, and toward the student, since the teacher deemed them a worthy individual to pass on their knowledge to.

So after that daisy picking, back to my teacher and I, talking about a certain Shikoku. He'll usually ask me what I think, which is always sort of a pop quiz. I think at the time I started listing faults that I could see. He stopped me there. He said, "As an ordinary dog owner, you don't really know what a dog is supposed to be like, so you see what you like. Those are the first things you notice. When you become a student of the breed, you begin to notice faults, and all too often these are the first things you will comment on. But a true breed preservationist/specialist should see the good traits in the dog first. What parts of this dog do you want to pass on to the next generation?"

I've thought about this a lot over the years, and why it is so important. In trying to breed a better dog, I need to focus on what is good, and try to keep those traits, while carefully removing the faults. If one's focus is always on the faults, you end up breeding toward a 'safer' dog, but you may have lost a lot of the essence of the breed along the way. ただの犬になる (tada no inu ni naru) is something I've heard numerous times in regard to the Nihon Ken. It roughly translates to 'it will become just a dog'. Four legs, prick ears, and a curly tail still make it a spitz type canine, but it will have lost the uniqueness of the aboriginal Nihon Ken.

In the early morning hours of August 7th, the legendary Inoue-san passed away. He went quickly due to a pulmonary hematoma. 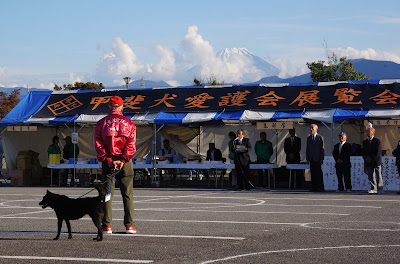 For everyone who has followed my blog over the years, you know that my first Nihon Ken, a Kai named Haru, was bred by Inoue-san. He was an amazing man, and not just because of the amazing things he did with his kennel Sai no Kuni Inoue Sou. He took Sougou (BIS) at the KKA national show twice, first with Nanyou no Riki, and then again with Shinshuu no Daishin. He won the Terada Cup (RBIS) at the KKA national show twice, first with Sai no Takahime, and then again last year with Sai no Haruka. I don't know of anyone with that kind of show resume in the KKA. That's not to mention the results of dogs that he bred, or were bred from his lines. 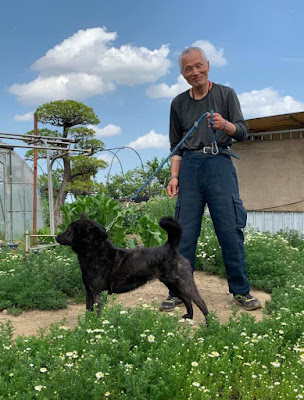 But beyond his show results, what he did for the breed was due to the amazing human that he was. I know it's bandied about a lot when someone passes, that they were a great person, but he really was. He was the most kind and giving person you will ever meet. He gave to his own detriment, of his time and energy (and loads of good food!), without ever saying a negative word or complaint. He will be missed at the national show, where he would show up every year with boxes and boxes of fresh fish, all labeled for his friends. He will be missed at the Tsukiji fish market where he was a master at carving up maguro. He will be missed by his family. But, I think he may be missed most by his dogs. He loved them, and they loved him in return. We understand what has happened, but all a dog knows is that his friend is gone.
Inoue-san looked after me when I hit a really rough spot going through my divorce. A call here and there to make sure I was okay, always jokingly telling me to bring a girlfriend over. I can't count how many dinners I've had at their table.

Hangin with the Inoue's. They've looked after me through the rough stuff. So much love in this family

His presence in the breed was nothing less than a positive, his energy drawing people to the dogs, to the breed. He leaves a gaping hole in this world, and in all our hearts. RIP Inoue-san, may we all live our lives half as well as you.
Posted by Kato at 11:03 AM 1 comment:

Delete Data From the Database?

EDIT: There have been assumptions made regarding which kennel requested their dogs be removed. I did not list the name of the kennel because the point of this post was not to point fingers at people. I just wanted to publicly announce that dog names will not be removed from here on out, but incorrect or personal data can be removed. With the current discussion of health issues in the Shikoku, people have assumed this was a Shikoku kennel request (assumption is a dangerous thing). It was not. I don't believe this kennel's request was linked to the health of their dogs, more that they (understandably) wanted control over the data of their dogs.
I was purposefully vague about the request, but by not posting details, there has incorrect assumption. I could have taken a bit more time to imagine all the scenarios, and write a better post about this. My apologies. The community preserving the Japanese breeds is a small and passionate one. Let's try to focus our energy and time positively, and find ways to work together to tackle the issues we face.
I have recently been asked by 2 people to have their dogs removed from the Nihon Ken Database (after they had incorrectly been listed as suffering from epilepsy). I was very apologetic, since bad data like this is not helpful at all in tracking health issues in the Japanese breeds. More recently I was sent an email from a breeder in Europe asking for all dogs with their kennel name, and all dogs they had imported from Japan, to be removed from the database. Here is my reply.
Thank you for your mail.
I am currently accepting requests to remove private information (if it makes its way to the database accidentally) such as owner names and contact information.
I am also accepting requests to remove or correct, incorrect or unverified health information.
Because the database has been set up to track health issues in the 6 Nihon Ken, I am not currently accepting requests to delete dog names from the database.
Regards,
Shigeru Kato
If in the future I am made aware of a legal need to remove dog names from the database, I will do so. Currently, it is not in the Nihon Ken's best interest to remove possibly valuable data. Thank you all for continuing to support the database with your donations, and your data. 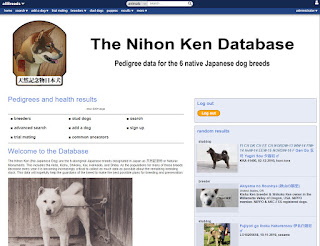 Now it is official, the NIPPO Grand National 2020 has been cancelled. Hopefully next year we'll have one! https://www.nihonken-hozonkai.or.jp/news/ 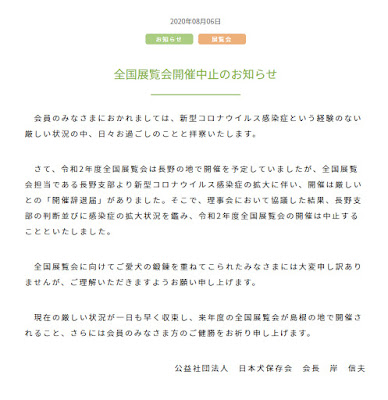 So it's a bit late in the year, and usually we'd have needed to renew our membership by now, but here we are in August. I say we, because I have not yet paid my dues either. Corona. Yup, been too busy.
So for all you KKA members who would like to renew your membership, now is the time to hit me up (as I will be doing all the paperwork in bulk). New members are welcome too!
To become a KKA member costs 5000JPY. Yearly membership costs 5000JPY.
The KKA ships out a biannual membership magazine, but while the KKA long ago allowed me to start registering overseas members and litters, my end of the bargain is that I have to organize all postage of magazines and pedigrees etc. I have kind of ignored the fact that I have been shipping out magazines and pedigrees to everyone overseas, and paying for the shipping out of my pocket for the past 10 plus years (yikes). So, I will start charging for this from here on out.
If you send me an email at kato.the.walrus@gmail.com, or hit me up on FB messenger, I'll write up an invoice and let you know how much everything will cost. I'd like to finish all the KKA related paperwork by this Sunday, so please contact me before then if you're interested. 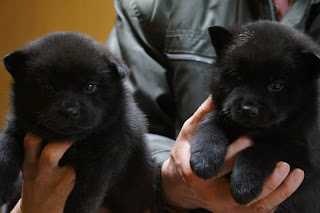