I've always liked him. The dude has character. Here's some of his ring entrance and fight footage from his days as a mixed martial artist. 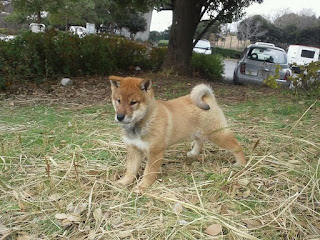 Ohhhh I like this girl. Her temperament suits me perfectly, not too shy, not too outgoing, perfect balance for me. This little girl is a Nihon Ken. I like her face too, I think she'll be a beautiful Shikoku. Color on her body is still a little light, hopefully she'll darken a bit more as she gets older.

Gah, another pup I want to keep, but no. She flies tomorrow! 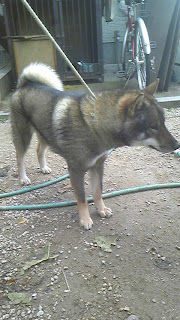 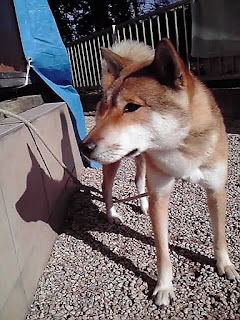 Had to re-watch this. Sudo Genki and World Order dancing in the key of awesome. Haha. Gotta love it. I was a fan of Genki when he was a K-1 fighter, and to see him doing this brings a smile to my face. Having already discussed the white/cream coloration in the Nihon Ken, and the reasons why it is not very desirable, I've been thinking on, and getting feedback on the accepted colorations in the Japanese breeds.

Pulling out the standard as put forth by NIPPO we see the accepted color variations for the Nihon Ken or Japanese Dog. Here is a quick, rough translation of the original, and not an interpretation of the standard. It is written with a lot of archaic Japanese included, which always makes things a little more taxing to explain/translate.

The present day standard for the coat is slightly changed.

Coat: Outer coat bristle like and straight, under coat soft and dense, hair on tail somewhat long, with hairs open and standing. Coat colors are sesame, red, black, brindle, and white. Coat quality and color should express characteristics and features typical of  the Nihon Ken.


Yellow (fawn) was removed somewhere along the line. Looking back at old pictures of the Nihon Ken, there are some examples of piebald or spotted dogs. The fact that there this variant in coat color has always been in the breed was acknowledged in the original interpretation of the standard, but the choice to breed away from this to establish type, and preserve the other colorations was made. Small amounts of spotting was allowed on the face, chest, legs, and tip of the tail, but the preference was toward solid clean colors on the body.


Disqualification: Short coat due to deformity


And from the addendum, names of the the coat color variations.


It's 1:30am and time to crash, so this is it for today. In part 2 I will translate the section in the current judging criteria governing coats.

Here's a link to the pictures of the winners and placers of the 2011 Nihon Ken Hozonkai National Exhibition.

There were 921 entries, of which 635 were Shiba, 147 Kishu, 125 Shikoku, 8 Kai, 2 Akita, and 4 dogs were entered as 'sankou ken' (exemplary animals, past winners etc, are on display for the consideration of NIPPO members as good examples of their respective breeds).

Thanks for all the comments (and mails). I have to agree that the darker dogs contrast well with their urajiro, and it carries into photographs.

Personally from a preservation standpoint I don't really care what color the dog is, temperament and conformation are what is important to me. I don't really have a preference in Shikoku coat color. I spoke with some NIPPO members and judges about this, and while there may be personal preference among some owners in regards to color, it does not seem there is any overall preference toward any one coloration in the breed. The Shikoku 'type' has pretty much been established, even if recessive genes do pop up every now and again, and apparently some NIPPO members seem to have found that certain combinations of colors will produce certain average percentages of coloration in litters. Of course it's not an exact science.

Someone overseas did mention that it seems that kuro-goma Shikoku produce the most variety of coloration in their litters, so I asked around about this, but no NIPPO kennels I spoke too seemed to find that to be the case. They felt it was more an issue of the genes in certain lines as opposed to a certain coloration producing more variety.
Posted by Kato at 12:28 PM 3 comments:

Why does everyone overseas looking for a Shikoku want a kuro-goma (black sesame)? I'm asking this as a question, and don't mean to offend any of the many friends I've made online who have asked me to look for a kuro-goma (you know who you are lol).

I could make assumptions as to why everyone prefers kuro-goma, but I thought I'd ask instead.
Posted by Kato at 3:55 PM 10 comments:

I just got a call today about an aka-goma (red sesame) female Shikoku ken that is available. She was born in a litter of  three, and the 2 males in the litter are spoken for. She was born on the 11th of November. If anyone is interested in this pup, feel free to contact me at kato.the.walrus@gmail.com 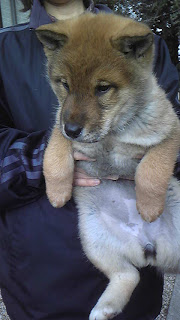 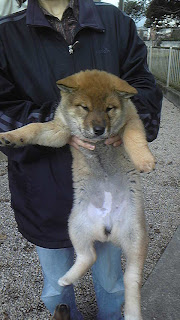 Happy New Year everyone. I spent the 30th, 31st, and the 1st in the mountains. I brought in 2011 hunting in the mountains with my dogs, and spent the last day of it there as well. 2012 has now begun with a fun, tiring hunt. 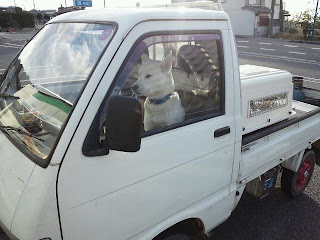 I went out today with my youngest brother and Baron. After getting all the gear ready, we decided to let Baron choose which ridge we would hunt. Got to the first one, and Baron was already scenting and looking up at a spot where there are often deer and boar. Okay then, that decides it, and Baron is released. He took off and was gone in a flash.

We slow humans did our best to keep up, and he spent the next 40 minutes chasing game in a criss cross through the ridge we were in. We did get sight of the deer he was chasing a couple times, but in the end the deer won, and we moved on.

We climbed higher and further into the mountains, Baron picking up scent every now and again, but nothing definitive. Finally as we came to the back end of the ridge where it forms a U, Baron perked up, and moments later we heard a deer's warning bark. I glanced ahead and saw two does moving running up toward the ridge. I had time for one fairly decent shot, but it was at a distance of around 70-80 meters, and ended up missing.

We moved around the U, up the ridge in the direction the deer had gone, again, further into the mountains. As we came around a bend, Baron perked up again, and I glanced down in the direction he was pointing and saw a group of deer running through the bottom of the ravine. There were quite a few boulders, and a very small window of opportunity. There was a spot between two boulders that I saw the first deer move through, just as I lined up on the second I saw the buck coming in third, lined up on him and fired. One shot and he buckled and went down.

We three scrambled down toward the buck, with me sliding half the way down on my ass. Baron completely missed the fact that the buck was down, for a second following the scent of the does. He turned around and realized the buck was still there and jumped on him. The buck had a fairly decent size and rack for a Nihon Shika, and Baron held it while I dispatched it. My single shot had been off target, but the slug had done its job. 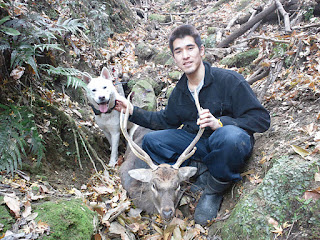 I love Baron's absolutely goofy expression in this pic.

It was all fun and excitement till we realized that we were 2km into the mountain, at the bottom of a ravine. To make a long back breaking journey short, we ended up taking around 6 hours to finally have the buck out of the mountain and all the meat butchered. He was a heavy animal, and my brother and I were/are exhausted. Baron for his part thought it was fun to randomly attack the buck as we were carrying it. During one of our breaks, Baron took off up a ridge and got on a boar, I was so tired I could barely bring myself to load my shotgun and head after him. He did a decent job, but the boar was pretty clever and managed to slip away.

All in all, an extremely memorable day. I'm not really into hunting deer with my dogs, and this is the first year I have taken any deer, and that mostly because boar numbers have plummeted in this area near my brother's house. I'm planning on checking out my old stomping grounds from last year next time I hunt, in the hopes of getting Baron on some boar.
Posted by Kato at 10:48 PM 1 comment: