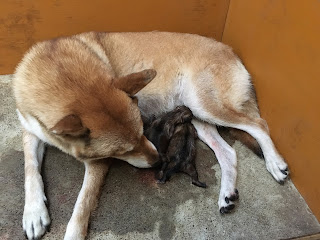 On the 18th of September Chacha gave birth to 5 pups, 2 males and 3 females. All the pups look to be red sesame, though female 3 might be red. Unfortunately on day 2 female number 2 was accidentally smothered. I'd put a towel in the kennel, one of the pups crawled under it, and Chacha and the pups were on top of her by the time I got back from walking the other dogs. It was a matter of around 45minutes that I was gone, but resuscitation failed. It was a hard thing to accept, but I'm just focusing on the fact that I have 4 healthy pups. 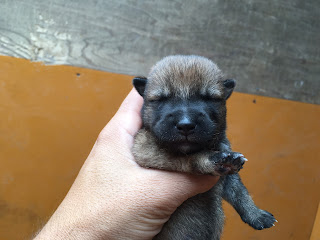 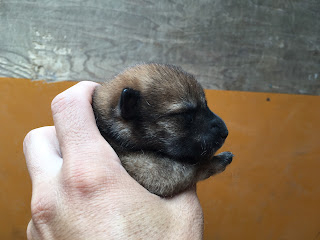 The above is male number 1. 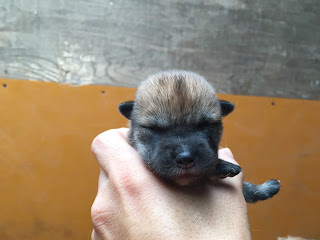 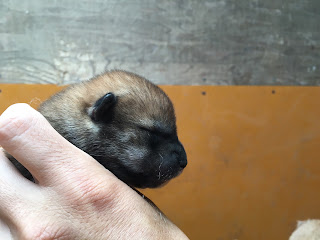 This is male number 2. 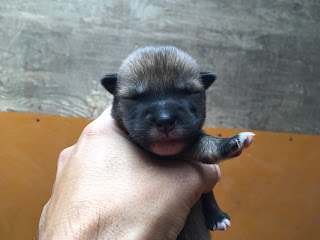 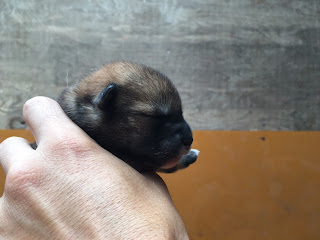 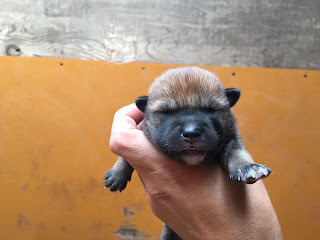 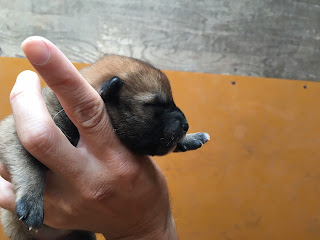 These pictures were taken at 2 days old. I'll keep updating as I always do, so everyone can see the pups maturing, and hopefully learn about more about the breed (as I do every time I get to see a litter of pups change as they grow).
Posted by Kato at 8:51 PM No comments:

Nearly lost one of my Shikoku girls this month. Mumu was bred on her heat (last attempt before retiring her), didn't look pregnant one month on, and that was when everything started. She started losing appetite a bit. Usually she's a pretty voracious eater. When I started to worry was one day when she didn't want to walk up hill. At first I thought maybe her hips were starting to bother her (she's got pretty poor hips), but after she left all her food a few days later I took her in to the vet.

A sonogram showed the womb slightly enlarged, but normal considering she could have been pregnant. We got some light meds to treat possible pyometra which was my main concern. Her heat before this she had been bred as well, and got quite large, but turned out to either have absorbed the pups or not to have been pregnant at all. Anyway, she started eating grass and vomiting daily, and continued to not eat. After a few days I took her in again, and we drew some blood. The results showed her kidney function was poor, but again not too much clarity on how her womb was doing. We ramped up meds, and my vet finally got me to agree to learn how to put an IV in. That's one of those things I've always just taken my dogs in for, but every so often it's a necessary and quick fix for issues, and if I'm already able to sew up my dogs every now and again, putting an IV in is another good skill to have.


Hard pic to like #fieldhospital #shikoku #cabin #japan #iv I finally relented and let my vet teach me how to put a drip in. Mumu's not doing too well...
Shigeru Katoさん(@katothewalrus)がシェアした投稿 - 2017 8月 16 8:09午後 PDT

With a new slew of drugs and a box full of IV, I moved Mumu into the house so she could enjoy the airconditioning. There was really no change. She slept all day, wouldn't eat, vomited a lot, and just started wasting away. All in all she stopped eating for around 3 weeks, got rail thin, and I made my peace with the fact that she was not going to make it. I'd carry her outside to urinate, and we'd walk around on the lawn for a while.

Well she was really starting to weaken, and it was hard to watch her in such obvious pain for so long. I remember thinking I'd maybe take her in to the vet the next day to have them put her to sleep. Well next morning I let her out in the back yard while I got everyone's breakfast ready, and all of a sudden she started eating some of the leftover kibble. After so many weeks of trying to make so many tasty thing for her to eat even a few bites of, and now she's just gone for the dry kibble! Anyway, it was fast after that. She's back to normal now, aside from loss of weight and muscle definition, she's back to being the same old beautiful dog.

My vets were shocked when I told them yesterday that she came around. We were all sure it was just a matter of time. But hey, I guess Mumu wasn't ready to kick it just yet. I'll be waiting till she's put on a bit more weight, and then I'll be spaying her and looking for a retirement home.