There are Kai Ken puppies available. Males. Everywhere it seems.

There are several big chu-tora boys at Gotenyama Kennel, and they have a sister as well. Mashiko Kennel also has a couple kuro-tora boys available, one of which I really like. He's a really friendly little bugger, and has a really nice head. These boys also have a kuro-tora sister who is also available.

Here's a pic of the litter at Mashiko Kennel. 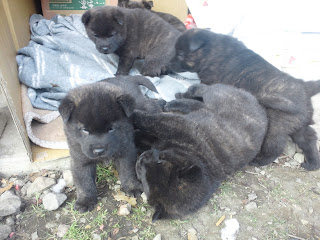 And one with mom, Suzu. 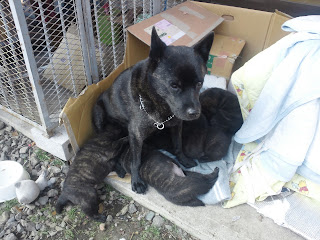 The other day I took a couple pics and some short videos while I was picking up a pup from Gotenyama Kennel in Hachioji, Tokyo. 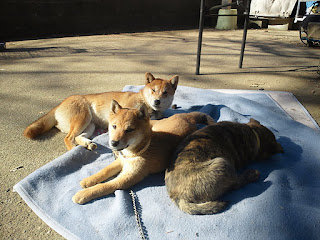 The kennel is run by a good friend of mine. It's interesting that he doesn't kennel his dogs. Most NK kennels have their dogs kenneled up outside, usually singly, sometimes in pairs. He used to have his dogs chained on long leads in a courtyard area, and I think was rather pessimistic that NK (especially males) could be left together. I think a little bit of Brad Anderson rubbed off on him, and now the puppies have free range of the place, and most of the adults are allowed to interact.

Of course due to the Kai Ken's amazing escape abilities, the adults are on long leads when unattended, and some of the males do have to be kept apart permanently. All in all though, it is a much more fluid environment than I am used to seeing in kennels here in Japan.

Gotenyama Kennel is a KKA registered Kai Ken kennel, but they have some Shiba as well. It's interesting to see the differences in the two breeds when they are kept side by side. Them Shiba's are snarky little things.

Here's a short video of the pups and a couple adults mobbing me while I was there. The female 'Hana' is the dam of the female that I just sent to Yamabushi Kennel on the 28th. Hana is interesting in that I'd only seen her on chain in the past, and she always put on a good show of barking at me, I'd imagined her to be a bit unfriendly. However with her being off leash a lot when I see her now, I've realized she's a terrific dog. She is extremely well trained and obedient, can be walked almost anywhere off leash, and loves people.

I've been working like a mad man. The end of the year is upon us, and I've been getting last minute work from all sorts of places. I've also been juggling getting some pups overseas. Yesterday I sent off the first batch of 3 Kai Ken puppies, 1 from Gotenyama Kennel, and the other two from Yamagata Kennel. I also have one mystery pup that decided she was going to sleep in my bed with me last night. The night before last I had 4 pups in my bed... 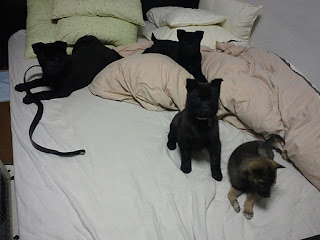 And three of the pups left Narita on the 28th. I got the usual adrenaline rush when the woman at the United Airlines counter tried to tell me that 2 pups couldn't be in the same crate unless they were under 8 weeks. I thumped her over the head on that one, and basically rattled off United's pet policy to her. 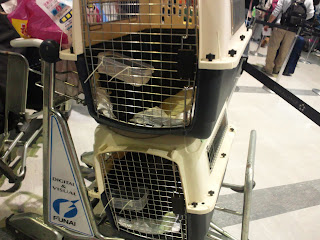 And here's the remaining mystery pup giving me the stink eye and growl after I took one too many pictures of her royal highness. 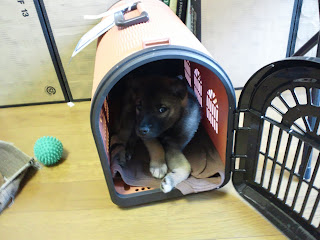 I've got quite a few people waiting for Shikoku pups, and there were quite a few litters planned around the end of this year. Unfortunately there's been very few successful breedings. One kennel bred 5 of their females, and none of them were successfully impregnated. It's very disappointing, but hopefully there will be some litters around the middle of January. I will post here on the blog if any pups do become available. Lastly, Merry Christmas everyone!
Posted by Kato at 2:05 PM 5 comments:

If you are a dog owner, this is definitely a good video to watch. It is uncomfortable to see this American Akita obviously in distress, but it's informative for dog owners to see the signs of bloat. It could save your dog's life someday.

A short video I took of the Tokyo FCI Dog Show. 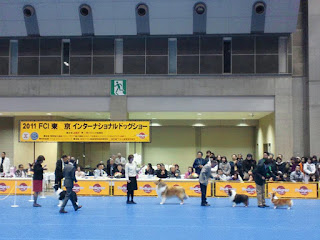 So today I had a bit of work to do at the Tokyo FCI International Dog Show. Loved it seeing as I was able to hang out and get a look at all the dogs. It sure is a different atmosphere from the exhibition/dog shows that I'm used to. I think most of the NK I know of would break down or freak out if taken to a place like that. Of course I'm sure if you got them used to it from when they were pups they'd deal.

Nothing too much happened, though I did have some good conversations with the JAHD which is basically the Japanese OFA/PennHip, and with GTG LABS, a company that does DNA testing for coat color, breed, and inherited diseases. Was nice to make some connections there that will probably be useful in the future.

It was amusing to see all the dogs up on their tables getting preened to perfection, standing at perfect attention. They end up looking like little machines. Saw some interesting breeds that are pretty rare in Japan, snapped one pic of a CAO, there's only 12 of them in the country. I'm pretty sure I would have been a show stealer if I had one of Yamabushi Kennel's Ovcharka with me. 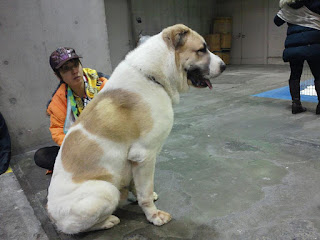 I saw two Japanese Akita at the show, and one American Akita. Other than that, I didn't see any Nihon Ken entries which was rather disappointing. 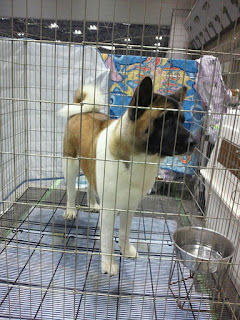 I saw this guy just as I was getting ready to leave. He was a really stunning dog, with an amazing color that reminded me of the Minowa Shiba. He was larger than a Shiba though, so I asked his owner what breed he was. I'd play the breed guessing game here, but I'm pretty sure no one would get it so here goes. He's half Ainu Ken (Hokkaido) and Higo Rou Ken (Higo Wolf Dog), and he's a bonafide working dog (boar hunter). The Higo Wolf Dog is from Kumamoto prefecture, and is said to be an actual hybrid Japanese wolf/canine breed. They pretty much went extinct, but there's still a few dogs of possibly uncertain origin that are still around. They are still pretty famous hunting dogs. 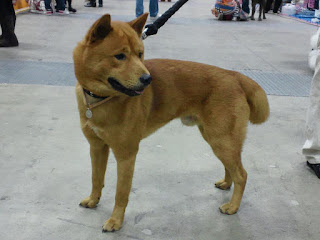 The Shiba Inu Hozonkai (Shibaho) broke away from NIPPO in the 1950's, and began breeding Shiba back toward structure found in ancient dogs whose bones have been unearthed in Japan. This has resulted in a very different Shiba, with shallow stops, long thin faces, large teeth, thinner/longer and more agile builds.
Posted by Kato at 11:53 PM 2 comments: 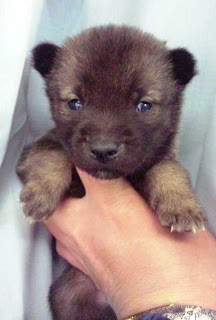 Taken from Everything About the Nihon Ken published by NIPPO, here are diagrams and explanations about the standard for fore/hindquarters. 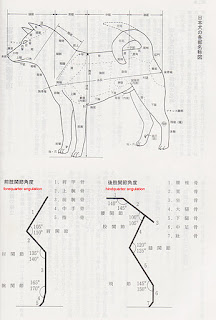 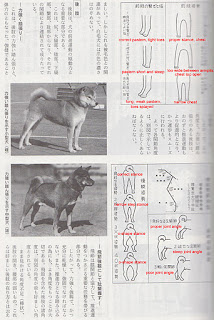 One day I will get around to translating the entire standard.
Posted by Kato at 2:23 PM No comments:

It's been a busy week. I get to meet a lot of celebrities in my line of work, but this was the first athlete I've taken care of. Thierry Henry was a terrific guy, and it was a pleasure to translate for him for a week, though it was hard work. Trying to keep up with the energy of a world class athlete for a week takes its toll. It looks like I ended up in some TV spots and a lot of Twitter action (in the background of course). Ogawa-san from Gotenyama Kennel randomly found this on Twitter and sent it to me. 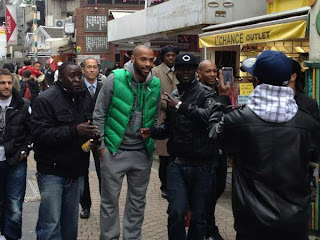 Well after all that work I am now going to take a few days to get some backed up work taken care of, then head out to the mountains for a few days. Should be good.
Posted by Kato at 10:20 AM 3 comments: