Sorry, bit of a delay between posts. Tends to happen when it's the end of the year and the house is full of pups. I'm sitting here in lounge at Arlanda airport in Stockholm and have a few minutes so here goes.

After a harsh showing at the Kanto regional, there was still a week before the grand national. A bum knee and heaps of things to do cannot stop the process. After busting the knee I had to find a way to exercise Masa without it. I had a friend of mine take him walking through the mountains a few times while I, shotgun in hand, would lurk around the bottom of the ridges in case the boar came down or there were other problems. However, there's only so many times you can get your friend to hike the same mountain per week, so plan B. I trained Masa to follow or lead the car on command.

It goes like this... I'd drive up into the mountains with him, GPS him up, and let him out. Then I'd start driving. I'd call him forward in front of the car and let him full on fly. He got the idea really quickly and loved tearing along at full speed. That's what you need to build some good muscle, full on sprints. If he picked up boar scent, he'd perk up and be off into the mountain for a good run while I pulled over and watched on the GPS. He'd come back after a bit, and we were off again. It takes me around 2 hours to walk and care for all my dogs in the morn, and 2 hours again at night, so this would happen either in the afternoon before the night walk, or more often in the dark after the 2 hour dogathon.

The flip side of all this exercise is that it definitely increases a dog's appetite, and Masa's condition finally started picking up. By the time the weekend of the Grand National closed in, he was finally starting to bulk, and around 30 percent in coat. He's in much better condition now haha. Anyway, there were times through the process where I was quite frustrated. Masa's got his flaws, so the only thing I felt I could do to compete with the other males at a national level was to have him in near perfect condition. There were a couple males that I knew would be in the same class, and one in particular that I was sure we would not be beating. As it was, we did not beat this male, but Masa came in right behind him.

The NIPPO Grand National is split into two days. One day for the 'kogata' (small type or Shiba) and the other for the rest of the breeds. The best in show competition is on the second day after all the best of breeds have been decided. This year the shiba had Sunday, so the rest of the breeds had Saturday, which turned out to be a downpour. I left the house early Friday morning to help with picking up judges and setting up the show ground. By evening a contingent of Shikoku breeders from Shikoku had arrived, and we all set up camp together to spend the night with our dogs (a tradition). Long story short, Mark arrived, I made up a wicked boar stew, we bbq'd some fantastic ezo-shika venison, and got wickedly smashed drinking beer and some crazy sake brought up from Shikoku. The conversation continued long into the night, and after a few hours of sleep, we woke to the sounds of people arriving from all over the country pulling into the show ground.

It was cold, windy, and pouring rain. Mark proceeded to expel the contents of his stomach into the bushes behind the car. I wasn't too hot myself, but in a bit better condition. We walked the dogs, cleaned up, and started prepping. Standing in the doorway of our tent, I told Mark that you never really know what could happen at a show in rain like this. My dogs are used to being out in all weather, rain or shine, so think nothing of a little storm. Obviously some dogs/people will be bothered by the rain, and biggest point of all, the dampness would help Masa's coat look fuller.

I had one more job to do before going into the ring. To open the national, every year one entrant gets up in front of everyone to make a pledge to respect the judge's decisions and to exhibit fair play. This year I was given the honor, but I had a great time somewhat nervously belting out the pledge in front of the main tent and our current chairman Mr.Kamei.

As with the previous week, I decided to have Mark handle Masa. A part of me wanted to handle him myself after all the work I'd put in, but there was no way he'd be able to handle Cho. So off we went for the morning's first round of judging. We were in the wakainu 1 and wakainu 2 rings which were right next to each other. Cho did quite well in the morning, and Masa did okay. The morning's judging is where the judge checks each dog 1 by 1 and looks at structure/movement etc. The rain was by parts pouring and drizzling.

After a break for lunch, we headed back into the rings for the comparative judging. This is when the fun begins. All the dogs in class going head to head against each other, all of us wanting to be called up into the first group. Cho was doing so-so, and we got called up to the first group. That's when all hell broke loose and he would not stand anymore. The other males were to close and he kept lunging and pulling at them. We lost our chance to place, and ended up 5th I think. Just before the first group was called, someone whispered in my ear that Mark and Masa had just taken 2nd in class. Anyway, I was later berated by a few judges saying that the ring judge wanted to move Cho into second but since he wouldn't stand there was no way he could.


Anyway, final boarding call for London, so will have to continue this post at a later date.
Posted by Kato at 1:40 AM No comments:

It's a bit tough to get a dog in show shape with a messed up knee. To be honest we were not nearly in peak form by the time the national was rolling around, but all you can do is your best. The week before the national Mark and I dropped in on the NIPPO Kanto All Regional with Masa and Cho. 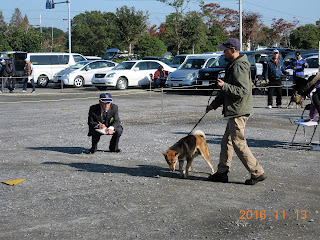 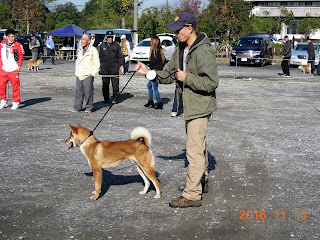 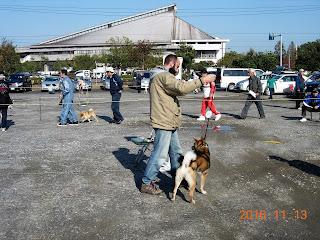 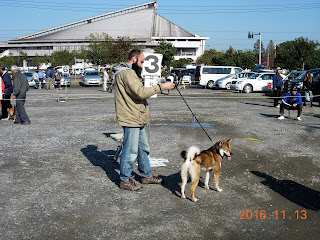 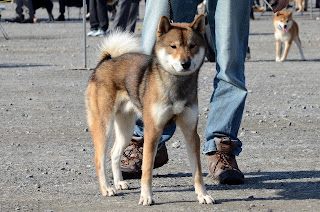 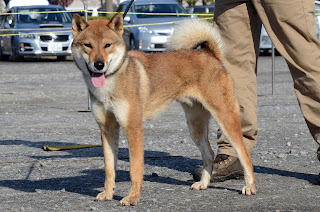 I opted to have Mark handle Masa since I practice with him every day on our walks, and he's pretty fool proof by now if you figure out how to move him. Cho on the other hand was pretty out of it since he hates cars and gets very carsick. In the end I think we both ended up last in class haha. But it was a good and necessary practice, albeit an ugly one. This was Cho's second show, and Masa's as well (his last show was in the spring). Neither dog was in peak form, but Masa's coat was finally starting to come in.
Posted by Kato at 12:40 AM 2 comments: