This little guy was born over at Sai no Kuni Inoue Sou in Saitama. The Inoue's are good friends of mine, and I really like the sire (Asahi) of these pups. Their mother, Kurumi, is the daughter of Peromi. Peromi is the most famous Kai in Japan, as she was raised on a national TV show along with 5 other pups representing all the Japanese breeds.


I'll say it again, I love Kai pups. For anyone thinking of getting a Nihon Ken as a companion, seriously consider a Kai. The ease of ownership has them tops in my book.

This little guy is just staying here for 2 weeks, but I picked him up Saturday, had him in the house meeting Baron in the evening. Of course he's still a pup, but the Kai's dog social nature was already on show. Lot's of really good communication going on, and understanding boundaries. I took him outside, he did his business. I put a couple absorbent sheets down in a corner of the kitchen (the same ones that I put in his crate when we drove home from his breeder), and later on he walked over and peed on them.

From there, he's been great. No accidents. Business is done outside, with some pee on the sheets. I haven't had to crate him at all, he just plays with his toys and Baron. He's quickly learning what is not to be chewed, and that when we go on walks we'll come back. Kai do often suffer from separation anxiety, but I think that's part of the package with a dog that chooses you as their person. The initial few days are important with a Kai pup, and slow comfortable socialization is key. They're very smart little thinkers, and their flight response to things can be very high. Don't scare them, always be their protector and be in control of situations, and they'll learn to trust you. Once they do, it's all gold from there.

Well, at least till adolescence. That's another journey.

For anyone that's wondering, I shot this video on my recently acquired Sony Nex. It's a digital mirrorless camera, and I can't recommend it enough. It's tiny. TINY. Goodbye DSLR, this tiny little camera shooting amazing still and video, with fun little adaptors which allow you to use old lenses (I have several now including a 50mm 1.8 Minolta which is amazing) has you beat. I picked up this cam to snap some good quality dog and surf videos, and I could not be happier with it.
Posted by Kato at 11:05 AM No comments:

Here are the dates for all the NIPPO branch shows for the coming autumn season. They will culminate in the grand national which will be held in Wakayama this year. I've already blogged the location here http://nihonken.blogspot.jp/2017/05/2017-nippo-grand-national-location.html

I should be at most of the Kanto branch shows. Now that I've typed this I'm realizing it's time to start the process of getting everyone show ready. It's still damn hot out here, over 30 degrees celsius. 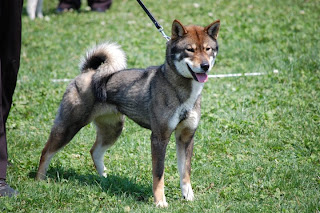